Firstly how does a kid from Saigon, Vietnam end up in London England?

My sister came to England to study in 1971, after the fall of Saigon in April 1975, my sister decided to stay in London and she brought my family to London in 1986.

How did you discover you wanted to be an actor?

My family did not have a TV when we were in Vietnam, I first saw a movie when I was 10 years old in London. It was "Enter The Dragon" and I just fell in love with this movie and action. As a teenager I was working as a cleaner in a cinema  just because I wanted to watch movies and I would be dreaming about being on the cinema screen. 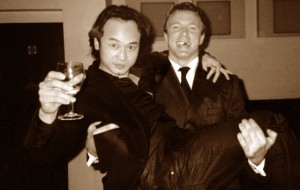 You've appeared in some classic TV series, The Bill, Ashes to Ashes and one of my favourite films Snatch, you must be proud to have appeared in such iconic works?

Working with director Guy Ritchie in Snatch was one of my most proudest moment in my acting career. 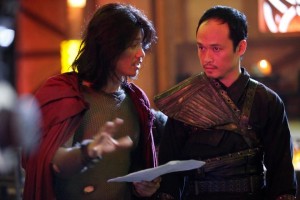 You also went back to Vietnam recently for Dustin Ngyuen's Once upon a Time in Vietnam, can you tell us what that was like?

It was really fantastic to be working with Dustin, I have seen many of his movies and I have a lot of respect for him. It was an honour when he asked me to join the project and it was my first time working in a movie in Vietnam so it was very interesting to see how they operate over there.

So bringing us up to date Iron Monk can you tell the readers about the movie? 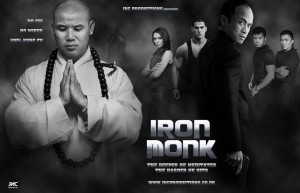 It’s a back to basic Kung Fu movie set in London, using real fighters, no special effects. Like the Bruce Lee movies, I want to focus on how the fighters moved, not how the camera moved. It’s an entertaining martial arts action drama with a karmic message starring a real life 34th generation Shaolin Master Yanzi Shi.

Your Producing, Writing, starring is it difficult to juggle so many aspects of one film?

I wouldn't say that it’s difficult, making movie is a long process so you have time to plan out what you need to do. But it does take a lot of your life, over the last five years I have never been able to switch off Iron Monk, always trying to find a way to raise the money so that we could get it made. Knowing that there are so many people wanting to see the movie and yet not being able to give it to them.

You have Shaolin Master Yanzi Shi in the film how did he come on board?

In 2000 I did a theatre show called “Shaolin Wheel Of Life” with the Shaolin Monks. I met Yanzi through the monks, we became good friends and remained in touch. I was amazed by him, his buddhist philosophy and his incredible Kung Fu skills. In 2010 I approach him with the idea for Iron Monk and told him I wanted him to play the lead. He didn’t agree at first, stating that he is not an actor. Yanzi is not a man who is motivated by money or fame, so to bring him on board, I assured him that I would make an action movie that would have his buddhist message. Writer Mark Pallis and I worked closely with Yanzi to get the buddhist philosophy right for the film. 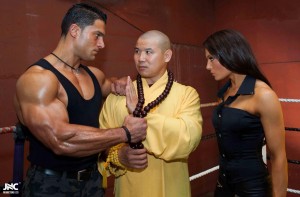 Also a couple of familiar faces Silvio Simac and Zara phythian, Im hoping they both get to show off their talents on screen with plenty of fist and foot action?

Yeah sure, you can’t have Zara and Silvio in an action movie without plenty of fist and foot action. In fact I can tell you that Zara is playing a character called Miss Thunderleg, a reference to my favourite villain from Drunken Master.

Before we go can you tell everybody about the Iron Monk Kick-starter campaign?

I initially looked to work with the private investors, but I kept running up against the same problem - how can you have someone that has never acted in your lead role, and I was advised to get a known actor. But I wouldn’t compromise. For me, Yanzi IS the Iron Monk. So that’s why I turned to Kickstarter. We need to raise £500,000 to produce the movie so I really need all movie fans, Kung Fu fans and Shaolin fans out there to spread the word on Facebook and Twitter.

I know you have also been working on another film Destination Saigon any news on this production?

Destination Saigon was to be my first produced Vietnam project for a studio in Vietnam but that was put on hold as the studio wanted to put forward my other project, a romantic comedy called “Father In War” which we are currently working on a new draft of the script with the director who has just confirmed to direct.

Finally The Eastern Film Fans question If you were stuck on a desert island and could only take 3 films with you what would you take? (It can be any genre)

So many titles come to mind but if only 3 then it has to be Enter The Dragon, The 36th Chamber Of Shaolin and The Legend Of Drunken Master.

I would like to thank you for taking the time to interview me and to your readers for their support.

Exciting news: We are moving Iron Monk to Indiegogo! This is because, whatever happens, we are committed to making Iron Monk happen. We know you want to see the film, and you know we want to make it. With Indiegogo, if we raise, say 50% of our target, then we can change our production plan, and make a lower cost version of the film - but of course, one that still kicks ass 100%.

Thanks so much to everyone that has already pledged. You are the fastest movers, and you are our most valued fans. It would mean the world to us if you could come to our new page and re-pledge, and help spread the word too. Thankyou - together we're going to make an awesome film.

Check out the link here for Iron Monk INDIEGOGO.