Tsui Hark returns with his WuXia epic and retelling of an old tale but will this be flying into your dvd player or will it be put to the sword. 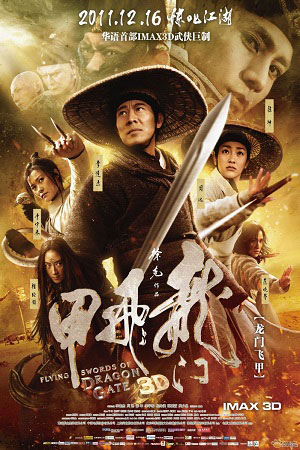 The scene is set with our outlaw Zhao Huai'an (Jet Li) taking out the government officials of the East bureau  which leads the leader of the West  Bureau Yu Huatian (Chen Kun) to hunt down Zhao.  He also has another he seeks to kill which is Su (Mavis Fan) who is a maid from the Palace and pregnant with the Emperors child.  Su then meets up with Ling (Zhou Xun) who has been posing as Zhao and causing trouble for the Emperor. .......Are you still with me!........

Now all the parties concerned all converge on the Dragon gate Inn where not only is there a Storm coming their way but untold treasures lurk beneath the inn and everone at the Inn might not be who they claim to be.

Ok its convoluted in its story but get past that and your in for a special treat.  Firstly I have to admit to not seeing the 3D version but can speculate that if you get a chance to watch it in 3D then please do as its made for that move medium.

Jet Li may headline but he pops in and out of the story in the first half of the movie but then this is a Tsui Hark film and its the women that get some of the strongest roles and propel the story forwards.

As I said the story maybe somewhat convoluted but the film itself works with its visual treats on the senses that could only be welcomed further with the 3D enhancement.  The action focuses mainly on the weapons and less of the grounded Martial Arts but it works for this kind of WuXia film.

Flying Swords of Dragon Gate may not be Tsui harks greatest film but he still delivers in the entertainment department and for those who do have a 3D Tv would do well to chase down this dragon at your local store.