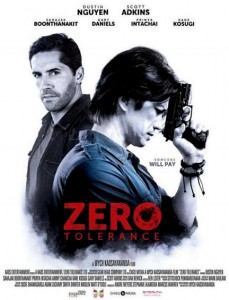 Zero Tolerance is a re-working of an earlier movie called Angels starring Dustin Nguyen and Gary Daniels (2012).  Angels was only released in Vietnam (due to Dustin's superstar status there) in November 2012. Re-shoots (adding Scott and Kane) and a re-edit have created Zero Tolerance for the world wide market

"So after a long and at times, difficult journey, some news to announce.  Angels has undergone some pretty radical changes since the start of 2014, we've done some additional shooting and added Scott Adkins to the cast and it should be released sometime this year under the new name, Zero Tolerance. Will keep you posted as things move forward. Thank you for your continued support.

Bangkok, Thailand. The body of a naked and bound young woman (Angel) is discovered on the Chao Praya river. A senior Royal Thai Police Department detective arrives on the scene and is horrified to discover that the victim is the daughter of one of his oldest friends, Johnny – a man whose friendship goes back to earlier days when both were CIA surrogates. A man who will stop at nothing to make whoever is responsible pay.