Ben here. I was first pulled into Asian cinema in 1986 I guess when A Better Tomorrow landed on the shelf of my local video rental store, in South London. I was eleven. I’d always liked martial arts. My father had got me into Akido and Karate at a young age and I ended up loving Ninjas, but then gun-fu took a hold of me. Maybe Pops was pleased as I could shoot better than I could throw a punch, though I could rewind a VHS cassette faster than most, especially when it was Asian celluloid behind those plastic enclosures.

This is the festival I have always dreamed of. It now exists.

The year has raced by as the Terracotta Far East Film Festival is back in full force in London and what a brilliant line-up they have for us in 2014!

Last year’s spotlight was on Indonesia and of course we all know what great business ‘The Raid’ did, let alone an unnecessary Hollywood remake.

The spotlight for 2014 is the Philippines and if any of you have seen the movie’s being made over there and released right now, then you know how exciting it is to have a main focus on that part of the world’s film-making talents.

Six Filipino films will be shown over the course of five days at the ICA and the Terracotta team have carefully chosen some absolute gems; the first being a true winner in ‘On The Job’.

Having its UK premiere on Friday 23rd May, director Erik Matti delivers such a wonderful dish of colourful violence, centring around prison inmates hired by the government to carry out hits when out on a temporary release. Inmates Daniel (Gerald Anderson) and Tatang (Joel Torre) are traceless assassins, with their corrupt prison bosses locking them in their cells once a hit has been carried out. Daniel soon wants out, however the younger killer, Tatang, shows a keen liking for the violence he unleashes. ‘On The Job’, also with a US remake on the cards, kicks off the festival brilliantly.

Next up is ‘Shift’, directed by Siege Ledesma and featuring huge Filipino singer-songwriter Yeng Constantino in her debut acting role, working a dead-end job within a call centre where she falls for a co-worker, who she discovers is Gay. A super script with snappy dialogue from Ledesma, peppered with wonderful visuals and a truly captivating cast in Constantino and her male co-star Felix Roco, who will be present for a Q&A after the screening (Saturday 24th May)

Felix Roco pops up again in another UK Premiere with ‘A Thief, A Kid And A Killer’. This recipe has an interesting mix of ingredients; comedy, friendship, violence, witty dialogue, bungling criminals, corrupt cops. Throw in a terrific performance from child actor Arvy Viduya as Little Maximo Rooney and the result is pure genius. Director Nathan Adolfson, Producer Gene Lacson and once again, star Felix Roco, will be around for a cool Q&A, too. (Sat 24th May).

‘Tuhog’ shall simply be introduced as a movie about a bus accident and the three passengers riding it who are each impaled by the same steel bar.

‘How To Disappear Completely’ really needs to be seen on the big screen, so don’t pass on this opportunity to do so. Actress Ness Roque plays a young girl searching for a way to disappear from her suffocating life.

‘The Search For Weng Weng’, another UK premiere, along with ‘On The Job, is my must-see. A documentary by Australian film maker Andrew Leavold. Andrew was once the owner of Australia’s largest cult video rental. Store; he now turns investigative journalist, heading up the search for the ‘Filipino James Bond’, Weng Weng. A two foot nine inch actor, who shot to fame in the early 1980s as Agent 00 in various James Bond style parodies, most notable ‘Y’URE HEIGHT ONLY’, actor Weng Weng disappeared from public view and Leavold, and a host of interesting and quirky interviewees, including a quite bizarre appearance from an 83 year old Imelda Marcos, this film will not only be an eye-opening experience, but to round it off, there’s a Q&A with Andrew Leavold straight after the show. 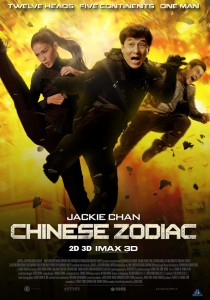 Terracotta does its usual, too, by previewing what’s hot and current in Asian cinema today. Starting off with what I like to call ‘Armor of God 3’, Jackie Chan’s unofficial sequel with him portraying treasure hunter JC in ‘Chinese Zodiac’. The Mission Impossible style caper that fans of “80’s” Jackie know and love will see him scouting the globe, tracking down six missing sculptures, which make up a 12 part set. Yes, there are bad guys aplenty and yes there are some outlandish stunts, whether they’re all Jackie Chan or look-a-likes, who cares – only the out-takes in the end credits will be proof. Here’s what I will say, this is what Jackie Chan does best. Happy Birthday, JC.

OK, so there was Bruce Lee; there is still Jackie Chan and also Jet Li, however Western audiences should naturally be reeling off the name of Donnie Yen when answering the question: “Who’s your favourite martial arts star?” Donnie, (who I know is a tremendous guy), is one helluva talent. He stars in the UK Premiere of ‘Special ID’, alongside actor Andy On, who is definitely, without a doubt a one-to-watch in Asian cinema.

Donnie plays undercover cop, Chen Zilong. He’s sent out to deal with an old adversary, Sunny (Andy On). Sunny’s a real piece of trouble, not only for the cops, but for the underworld. With some amazing action and tremendous martial arts ‘Special ID’ says Donnie Yen is back in a big way.

With each film I write about, I get excited all over again, just at the thought of catching them once more. ‘Fire Storm’ 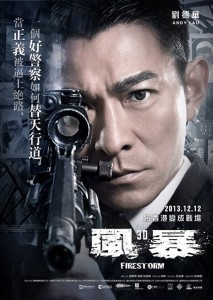 has familiar Canton favourite, Andy Lau (Infernal Affairs, House of Flying Daggers and Cold War) plays a by the book Inspector Lui who has to track down a gang of armed robbers in a ‘Heat’ style action thriller. If you want non-stop action in the vein of those late 80’s early 90’s HK show-pieces, this won’t disappoint.

Another UK Premiere has Terracotta showcasing ‘Unbeatable’. My current favourite Asian director in Dante Lam doing something a little different than walking around on set with a gun in his hand telling his actors how he’d like them to shoot, literally. This time round, it’s not for the fans of ‘gun fu’, but MMA / UFC. Scumbags, debt collectors, pro fighters, single mums on the bread-line, this is a gritty piece with some great drama and greater fight sequences.

I’ve skipped a couple here and landed on ‘Snow White Murder Case’. Once again, a UK Premiere by director Yoshihiro Nakamura. A movie focusing on obsessions with celebrity ‘culture’ and social media. Touches of Akira Kurosawa, however a must for those who caught Nakamura’s ‘Fish Story’; man, that was awesome.

Here’s a first for the festival. A Mongolian film! ‘Remote Control’. Now, Mongolia is really finding its place in the world, on many levels and film being just one of them. This is a coming-of-age story, certainly showing the differences between rural and urban life, when a late-teen portrayed by Enkhtaivian Bassandorj leaves the country and heads to the city.

Fans of K-Pop will see rapper T.O.P, (real name Choi Seung-hyun) from mega group ‘Big Bang’. He plays a North Korean undercover agent, deep cover in a high school. No, it’s not one bit like ’21 Jump Street’. Some wonderfully choreographed fight sequences and indeed a bike chase to remember, Choi has landed a very decent role. 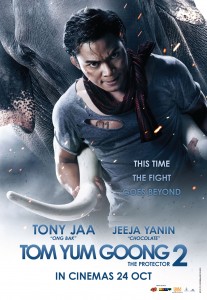 I’ll end the Asian Cinema section with ‘Warrior King 2’. It’s Tony Jaa, looking for his elephant once again, but this time, with RZA, getting in on the action after ‘Man With The Iron Fists’. Actuallym, RZA has always been in on the action. Jaa, (playing again Kham), goes on the run when he is implicated in the murder of his boss, the wealthy, powerful owner of a major elephant camp. Kham ends up having to fight in an underground tournament.

Last year Terracotta hosted their horror all-nighter. This year they’re back with ‘Terror-cotta’. Personally, I’m not a horror fan. It freaks me out and freaking people out cannot be outdone when it comes to the Koreans and the Japanese. Check out ‘Lesson of Evil’  and ‘In The Dark’.

So, Mr. Gareth Evans. I’ll not say he’s back with something new of his absolute own, but he does exec produce ‘Killers’. This Indonesian offering is without a doubt violent and has some uneasy to watch moments, but it does show off their wonderful locations in both Jakarta and Tokyo in striking, gritty style.

The Terracotta festival is fast-becoming that stand-out, must-attend event. A bunch of competitions to enter and a new venue in the form of ‘The Hub’, a place to go to between movies or a hang-out, at Opium Cocktail & DimSum Parlour, a personal favourite of mine. Great food. Great drinks. Great location in the heart of London’s China Town – www.opiumchinatown.com for more.

Check out www.terracottafestival.com for trailers, prices and the full line up of what will be a completely and utterly remarkable Asian cinema experience. Big thanks to Phil, Joey and Clare.