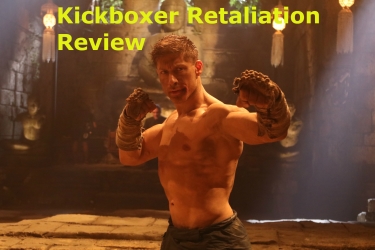 The Kickboxer is back in the sequel but will this be a knockout or make you retaliate.

One year after the events of Kickboxer: Vengeance, Kurt Sloan (Alain Moussi) has vowed never to return to Thailand. But while he is preparing for an MMA title shot, he is drugged and wakes up in a Thai prison. His captors want him to face a colossus named Mongkut (Hafþór Júlíus Björnsson) - in return, Sloan will get $2million dollars and his freedom. If he doesn’t fight, his wife will die. So Sloan has no other choice but to undergo his most rigorous training yet, under some very unexpected mentors, in order to take on this dreaded opponent. 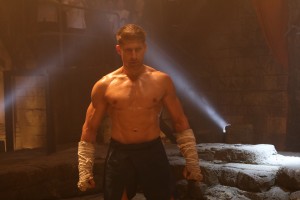 Alain Moussi is back and  this time he's taking no prisoners, well technically he's taken prisoner but here's the thing he's now The Kickboxer.  The first film Kickboxer Vengeance was all about could he replace or be the new Van Damme, this film he is The Kickboxer and is Alain Moussi there's no denying that its Alain's film.

Its all about the action in the second film opening with a stunning  scene on a train that's so different from the rest of the film but oozing stylish creativity, right through to the epic 25 minute final fight. Yes a 25 minute pound and ground kick ass knockout finale. 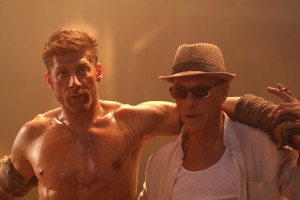 The film has some good action between these and some nice scenes with Mike Tyson and just down right bizarre with Ronaldinho, don't ask. There's also a few nice touches, firstly is a flashback showing Kurt Sloan's brother played by the late great Darren Shanlavi  (gone but not forgotten check out our interview here), a nice sword fight with Christopher Lambert (who said Highlander) and more than a nod to Enter the Dragon (Mirror Mirror on the wall). 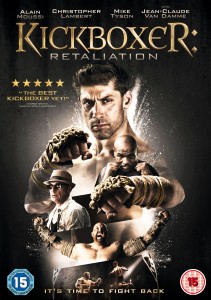 But lets get back to it, the real show stopper is that final fight with mountain of a man Hafþór Júlíus Björnsson its worth watching just for this epic final face off, I was really blown away with the action scene and I'm looking forward to seeing how they will top it in the next film Kickboxer Armageddon.  In the mean time if your a fan of action, and a fan of Kickboxer then this is going to be a sensational knockout.

Why After 50 Years Hasn’t there been a "GREEN HORNET" Official DVD Release? #BruceLee #KATO #GreenHornet #KatoShow 📸How Sweet Would it Be...Image: pic.twitter.com/6zi6…

“Even if you asked for the moon, they could get the moon for you, which was amazing” ~ director Chor Yuen in an extract from my book about #innovation at Shaw Brothers Studios ‘Ask for the Moon.’ Image by @GallopingSkirt askforthemoon.com.au… pic.twitter.com/ncSL…