The Foreigner sees Jackie Chan take a dramatic role based on the novel by  Stephen Leather but will this be to foreign for some or will Jackie Chan get the heart racing in this London set Thriller. 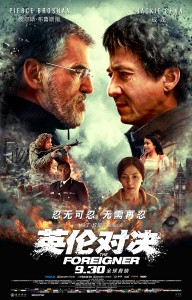 Jackie Chan plays Quan a London Immigrant who on dropping his daughter off, witnesses her death in an IRA explosion which rocks his world and sets out to find out who is behind the terrorist attack that killed her.  With him going to the police and not getting anywhere he finds out that Hennessy (Pierce Brosnan) a former IRA member who is now a British Government official. Quan then decides that to get answers he mus take matters into his own hands, hands that have a special set of skills, and so revenge, blood and chaos ensue.

I'm going to put something out there that will divide you, but this is one of Jackie's bets films, there I said it.  Not that its a Drunken Master 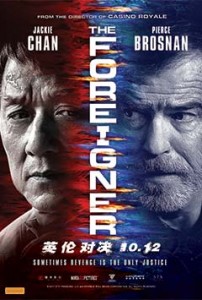 , or a Dragons Forever, even a Police Story, but here's the thing, this is Jackie Chan 30 years older than some of those films I've referenced. Not only has Jackie took a dramatic role that is contrary to most of the features that he does, Jackie has taken a role that also fits his age, time of life and something so relevant to society today.

Martin Campbell directs this with the gusto of Casino Royale, it skips along  (or should that be explodes) to every beat and former Bond himself Pierce Bronson adds gravitas to a role of man trying to keep peace and Jackie Chan being a hindrance to that process.

So credit where its due for Jackie taking a dramatic role outside of his normal comfort zone and if he continues to do so let me state for the record I want to see him return to the Drunken Master role as perhaps beggar So and while im doing a wish list can we also have a re-teaming with Sammo and Yuen in perhaps Dragons Return? 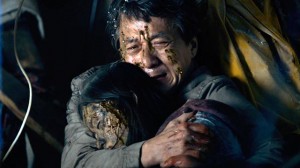 This is Jackie's film a man pushed to the brink by tragedy, a film that show cases not only how good an action star he is but how great an actor he is.  So go grab yourself a slice of the action in this explosive thriller that will re-affirm that Jackie Chan is the man.