So how does a welsh lad get from Wales to Indonesia ?

What happen was I got hired to do a documentary about Indonesia culture and the specific culture was Pencak Silat, Id grown in the Uk and been a big fan of action cinema especially martial arts films and the one thing I hadn't seen before in cinema was Pencak Silat and when I went off to do the documentary, I was blown away, I was seeing things I didn't feel Id seen being presented on screen, back then my aspirations weren't to make films in martial arts there weren't that many examples of welsh people going over to Asia to make 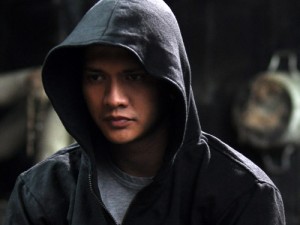 Martial Arts cinema, So for me it seemed such a pipe dream.  So what happened then through the documentary is I got to learn alot more about the philosophy and the culture.  I also got to learn about the different styles of Martial Arts that are over in Indonesia as all the different islands have different schools and methods of teaching and then the last piece of the puzzle I got to meet Iko Uwais whose become a star now but at the time was a delivery guy for a phone company.

But you've made him that star really?

Well practically hes made me as well, we've kind of come to this  together at the same pace and it blows my mind that were three films in now.  Its been an incredible adventure.

So what films did you watch grow up watching?

Well it all started off when I saw Enter the Dragon as Bruce Lee was the first one to introduce me to the Martial Arts genre and as every kid in the 80's I grew up watching Monkey Magic on BBC2, then actually the weird thing is with Jackie Chan is the first film I saw of Jackie Chan was Magnificent Bodyguards which is not the usual choice for people who are first getting to know his films.

No No you should lie and say something else? 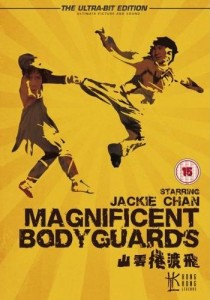 My Mom took a real dislike to it as there's a scene in Magnificent Bodyguards when one guy gets his arms chopped off and his face skinned and its so excessively violent and my mom switched it off and my mom said at the time "Who is this guy No more Jackie Chan in this house" I was mortified I really want to see more of this guy and my Dad brings back Armour of God and suddenly were watching Armour of God and my mom says "you can't watch this the last one was disgusting", but like one, two minutes in with the fight against the tribes people, she could see immediately that it was something different and my dad was like its "fine trust me as he'd already seen it before" and we watch Armour of God and it was a whole different side of the Martial Arts genre.  So mostly throughout the 80's there was always the three brothers films I used to gravitate towards so anything I could find with Yuen Biao, Sammo Hung or Jackie Chan I would be like consuming massively then in the early 90's there was a season of Jet Li films on Channel 4 on one weekend, with Once Upon a Time in China series and Fong Sai yuk and I got completely into Jet Li and it kind of snowballed from there.

You've been quoted as saying Die Hard & Assault on Precinct 13 were influences on The Raid but with Raid 2 I couldn't see evidence of any particular influence its as if The Raid 2, if anything ,people will look at and take ideas from? 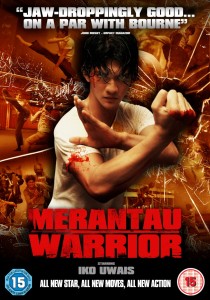 Merantau was an opportunity to bring Silat out, but then at the same time and with certain story threads and certain action beats they shared influences of Jackie Chan in there and the story line was kind of influenced by films like The Big Boss and Ong bak the fish out of water story, it was more playing towards the genre clichés a little bit with the first film Merantau and we were proud of it as it was our first attempt to do anything in Martial Arts and we knew we could do better and do something a bit more dynamic and when it came to The Raid and The Raid 2 it was kind of like an opportunity put our stamp in terms of what kind of  fight sequences what we really wanted to do. We were a little bit inexperienced on Merantau so what helped was the psychology of the man character as well because in Merantau Iko was playing a clean cut village kid so for the first 4 or 5 fights its that he's defending himself as much as he can and pushing and getting away from the action where as when it came to The Raid films the whole psychological set pieces of the action scenes are kill or be killed, its a totally different environment and a totally different world, so we got to show the more direct, aggressive and brutal elements of silat as well.

I want to congratulate you on The raid films and it was kind of a break out film and I think the genre had dried up a little bit and The Raid came along and blew us all away, the violence has a sense of Takashi Miike feel to it and there are moments that you laugh at the action to a certain extent. 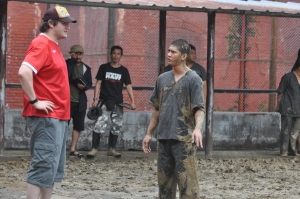 Its like that, Takashi Miike has always been a big influence on me and Takeshi Kitano as well, so for me its always been this thing of like why I enjoy watching those films and what I like about those films its that feeling of your in the hands of a maniac you strap yourself in and you sit down to watch the film and you have no idea where its going to go, you have no idea if going to cross the boundary of what you think is ok or not and sometimes he does sometimes he doesn't, sometimes he pushes at what I deem as acceptable in the things I watch other times he playing with that boundary and teasing you with it.  So that's something i have always found exciting by watching other peoples films is that question mark over how far somebody is going to take it, but for me and the films I make, like you said you want to laugh at it, which is entirely fine for me because the way we design the action beats we have these things, its called punch lines in the fight sequences, those are the sort of absurdly violent little gut punch reaction moments, especially if your watching in the cinema, partly the design is to get an audience to be watching the action sequence unfold and there following the rhythm of it and the flow of the choreography and then all of a sudden you hit them really hard BAM with this one gut punch moment its so outrageous and so absurd sometimes that it'll make one of the audience members gasp or jump it creates a sort of exclamation point moment in the audience and if your sat there and you've made that sound and 2 or 3 seats down or behind you have done the same thing at the same time it takes you out of the violence of the scene it creates a weird sense of communal environment with the audience in the cinema where suddenly you realise I'm in this room I'm watching this movie why did I react like that its so absurd, its so crazy, its so violent but then that whole process is within a split second so the natural instinct then is to kind of laugh but not laughing at the guy being hurt on screen but at the sheer audacity of it and also the communal experience your sharing in the cinema, so when you can bring that amount of levity to something that is otherwise played seriously it helps off set the violence it can stop it from being repulsive, it can stop it from being repugnant  A big part of that is due to the fact that when i watch movies with my Dad the one thing that he always objected to was that was anything that was sadistic or focused on the pain or suffering of a character so we'll give you the gut punch and we'll show you something that will make you feel like the violence will have an impact on that person but im not going to take my camera and show you the wound and show how much pain the guy is in I'll show you something really quick and BOOM we'll cut away to the next one.

Look out for Part 2 of the interview coming soon and check out the release of The Raid 2 on DVD and Blu Ray on 11th August 2014.