I've seen The raid 2 and you take it up a notch, focusing on action scenes there's some marvellous scenes the prison fight the kitchen fight the moment that stands out fro me was the car fight, how long doe sit take from conceptually writing that to putting that on the screen? 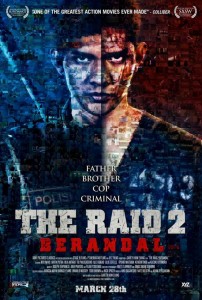 Its hard to equate an accurate time on it as for that one Id work on it or one or two days then I'd take a break and then i'd think of other ideas a few days later on.  Its one of those things, its like writing in any way shape or form its that idea if you force yourself to sit down and start working on something its always the worse time to do the work on it, mostly my ideas  come at literally 2 o'clock in the morning when i'm just about to go to sleep and just about to close my eyes and then an image will come in my head and fuck I will have to get a pen and paper right now.  The Car chase scene, I knew I wanted to do a car chase, I knew I wanted to do something that was a little different that i'd not done before, so i had all these ideas on how these cars would interact with each other, what we would do to make it feel different.  We couldn't afford to do a fast and furious film or a big expensive car movie, so for us it was like a case of lets treat the cars like there also humans in terms of the choreography so the way they crash against each other, the way they kid of bump each other its all about doing body damage its all about the rhythm of it, the timing of it, what would look interesting and what would look different.  It took awhile to structure it we did a pre vision version of the car chase where my CG guy would do a very rough version of what the car chase would look like using some fake computer graphic roads and buildings and so we could at least get a sense of what were doing with the camera angles and the stunts themselves.

I do love that top shot of Iko battling four guys in the car its a wonderful shot even though its only on screen for seconds.

Thank you, we brought in Bruce Law and his stunt team he has in Hong Kong so that they could help us execute it because we knew what we wanted but not how to do it.  So he gave us so much advise and brought over all of his expertise and his stunt team over to Indonesia to help us execute the scene and it was a great collaboration.  That top shot specifically where we cut to the birds-eye view and we see them fighting inside the car, that one we had to actually literally cut the roof off the car just to do that shot, and the plan always was to shoot the whole car chase first and then cut to that shot much later on in the shoot but then we ran out of budget so we couldn't buy a second car so we then realised we were going to smash it up in the end with the truck smashing into the side of it, so then we had to find a moment in the schedule  were we could take the car away cut the roof off, shoot the scene, weld it back on and then carrying on shooting the next week.  So our art department were not happy as they were the poor guys who had to cut it off and weld it back on again!

Any chance we'll see Yayan (aka Maddog aka Prakoso) live through one of your films? 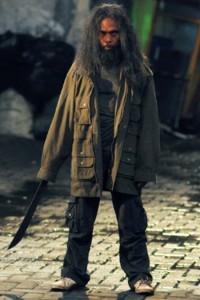 Everyone complains about that they say why "won't you let him live", my argument to that is that in each of the films his death has always been so fucking cool, he's so good at dying in films, it would almost be a shame not to kill him.  But you know what, I did give him a ridiculously hot wife in the next film.  I do have plans to cast him in other films so they'll be a bunch of stuff that i work with him on in the future.  SPOILER ALERT Especially in The Raid 2 its more of a symbolic death as he was so memorable as Maddog in the first film the fact that he's killed by The Assassin played by Cepcep in the second movie its seen as almost of a passing of the baton where its like he's going to be the Maddog for this film and this Cepcep guy is going to be a complete bad-ass.

Look out for our 3rd and final part of the Interview coming soon  where we talk Hollywood remake, Dredd and what everyone wants to know top 3 films!!