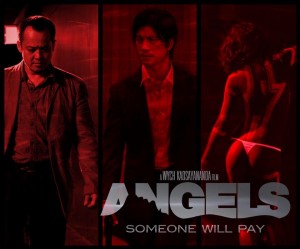 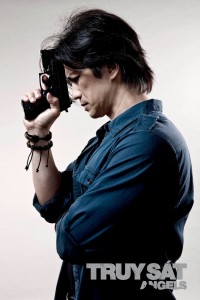 Directed by Wych Kaosayananda (Kaos), the director of Thai action hit 'Fha' and the Hollywood actioner 'Ballistic Ecks vs Sever'. It's his first film as a director since Ballistic. He also wrote and produced it too. It stars Dustin Nguyen and Gary Daniels, plus local Thai actors Sahajak Boonthanakit (Streetfighter: Legend of Chun Li, Beyond Borders, Elephant White) and Ammy Chanicha (Meat Grinder, Hangover 2)."Bangkok, Thailand. 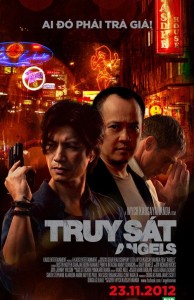 river. A senior Royal Thai Police Department detective (Peter) arrives on the scene and is horrified to discover that the victim is the daughter of one of his oldest friends, Johnny –a man whose friendship goes back to earlier days when both were CIA surrogates. A man who will stop at nothing to make whoever is responsible pay. Angels is a character driven drama following Johnny and Peter's investigation into Angel's death and the retribution that follows set against the back drop that is Bangkok in all it's glory and hidden flaws."

Its ONE TO WATCH from Eastern Film Fans

Thanks goes to Lee Mason 😉

Check out the update from Director Wych Kaosayananda in an article he did:

However, Zero Tolerance (formerly ‘Angels’) is an exception. That was a very personal project. I raised the money through 5 different investors, people who were my friends, and through friends of friends. I wrote the script and had full control, and once the movie was complete, it was the first time in my life I felt we accomplished exactly what i set out to do. It was a slow burn, character driven drama that had action in it, clocking in at 106 minutes. Some say it was too long, but what makes movies so special is that, it’s art, and therefore subjective.

Angels at 106 mins was the perfect length to tell that story. That’s my opinion. Now, I was clear from the get-go that Angels isn’t say, The Raid, but a different movie all around. It isn’t full on action and was never meant to be. We had great actors, and the biggest star I had in it was Gary Daniels. I wrote his part to play against type – No punching or kicking anyone in the movie. He came in and gave a terrific performance unlike anything he’d ever done before, and I loved it.

But, we couldn’t sell it. Buyers were expecting action and it turned out to be a drama. So from that perspective, maybe I would have been better served to have had someone who understood the buyers’ world to help me shape the movie in a way that would suit the buyers, because, it’s still a business. So, while I remain confident that Angels would have found an audience that would have ensured the movie was profitable at the very least, most people who saw it liked it, but the one universal answer I kept getting was, we don’t know how to sell it. And that was when Andre Meyers and Marcus Warren stepped in.
Andre is a terrific businessman who was trying his hand in the movie world for the first time. He really liked the final product and was very supportive. But after a while and as I was having difficulties selling the movie, he stepped in and brought on his friend Marcus who is a producer working in England.
Through Marcus’s contacts, it was determined we had to change the movie to make it more marketable for the buyers. And that is where Scott Adkins came in. I was given a set of new parameters and it was me who rewrote the script to make Scott’s presence in the film work. Andre financed the whole thing and we set off and shot for another five daysJust to be clear, Zero Tolerance is not Angels. They are two completely different movies. Zero Tolerance is a very slick, fast moving, more action oriented film, whereas Angels was a slow burn, character driven drama. The actors are all the same with one new addition, but the characters have all changed. ’

I was hired for ‘Angels’ and I had a great experience working on that film with Wych. There are a couple of things I felt could be changed , especially that in the script there was an end fight between Dustin’s character and myself but Wych felt the film didn’t need it so it was never shot although I think the audience was owed that showdown. As an actor, part of my job is to help the director achieve his vision and Wych is one of my favourite directors I have ever worked with (he is an exceptional writer, director and D.P) as well as one of my very best friends so I trusted Wych, he wrote the role for me and it was a great part.

With the new version I felt that the exec producers disrespected me but this is called show BUSINESS and the object of any business is to make money, a profit, so I understand why they did what they did but I am not happy about it. The film was already good and I didn’t think it needed new actors to be written in but one thing I have learned is that in this business it is not about your ability , it is about your MARKETability. I loved ‘Angels’ , we had a wonderful red carpet première in Vietnam, I was very close to that project but ‘Zero Tolerance’ is not that project.