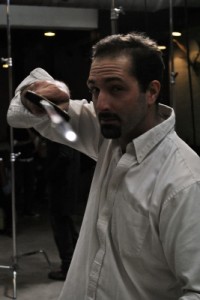 How does a New Jersey kid get from there to Birmingham?

I like to call myself a New Yorker as I lived in New York city and its where I felt most at home and my wife is from Bromsgrove so long story short Nine years later here we are.   I grew up in a small town and my expectations were I’d move here and I’d work in London but I got a job in Stafford and so we ended up here in Birmingham.  It’s grown on me and it has its own charms and flavour to it and reminds me of New Jersey a little bit, it has its cultural similarities.

You've done a lot of commercial work and then all of a sudden this project came about?

Everyone knows I’m a kung Fu fanatic and my whole family knows I’m into it and the first thing I ever did at film school was a Kung Fu movie and then I made some serious dramas and some Sci-fi films and then, well, I had to pay rent and get jobs so making stuff for a laugh just went out the window and so I guess this is why this project looks as if it came out of left field.  But in all the jobs I did I was always writing scripts and I’ve written three features and loads of shorts but that’s how I kept my brain fresh and kept in the game. 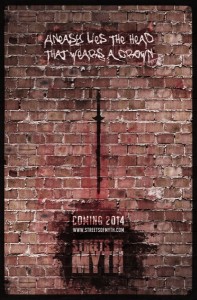 So Streets of Myth how did that come about?

Streets of Myth came about as an idea in New York City where the title makes way more sense, I used to watch a lot of  kung Fu films, a lot of Wu Xia films I watched  Jet Li’s Hero a thousand times.  I was walking in mid-town Manhattan and the place is so big it’s insane and I looked up at the skyscrapers and was thinking modern urban Wu Xia, why are there not people flying from Skyscraper to Skyscraper fighting to the death with swords, and I came up with the title Streets of Myth that same day with no story or anything else with people fighting Wu Xia duels like Crouching Tiger and Hero in the Skyscrapers in a modern setting.

I thought no way I can make this film happen in it would be the biggest budget film ever, remember it was 2005 there was no you tube, so the idea was set specifically in a New York version and similar to The Warriors with a gangs fighting district by district.

I guess something changed for you ?

I moved away and forgot about it completely, it was so tied to New York City and it was so difficult to extricate the idea from New York and make sense of it. But when I moved here I had a little more free time I thought I should get back on the horse and do something artistic, that I care about.  I’ll just do a Kung Fu movie of some kind and then it clicked if they’re in the world of Streets of Myth as I defined it in New York it makes total sense for them to get into a kung Fu brawl in a pub, of course it does, that world could be anywhere if it’s any urban setting then it could be Birmingham why the hell not, get on it dude what the hell are you doing. 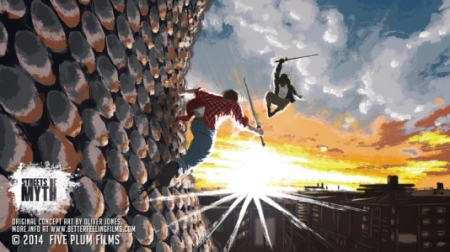 So what is the Streets of Myth?

So it’s about the haves and the have not’s we have the rich districts and poorer districts in Birmingham there’s a history and a reason for it and that can make drama if is a martial arts film and people will fight at the drop of a hat and that’s kind of the Streets of Myth formula and what I call the Modern Urban Wu Xia as a genre unto itself each district is a feudal system and there is no modern government and royalty still exists to a certain degree, it’s a whole fantasy world, a whole alternate reality.

So the reason why people from Aston are going to fight people from The Jewellery Quarter, which is what the plot of enter the streets of myth is, is because there closed off  systems that don’t speak to each other and have a beef from back in the day and that is just the way that the world works.

Check out Part 2 of the interview coming soon we talk  Game of Thrones, script, promo and favourite films.

Eastern Film Fans would like to Thank to Brandon Kahn for his time, enthusiasm and energy.
Tweet
Tags: Birmingham, Brandon Kahn, Streets of myth, Zara Phythian