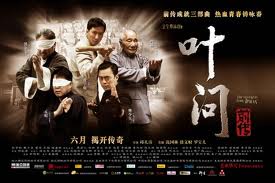 The Legend is Born - Ip Man

Another insight into world of Ip Man comes to the screen this time with less of the blockbuster feel and more of a homely one, but does this Wing Chun pack a punch, lets talk story.

Dennis To plays Ip Man who along with childhood friend Tin Chin (Fan Siu-Wong) are taken into the Wing Chun school by Master Chan (Sammo Hung) and make friends with Mei Wai (Rose Chan) where not only a friendship forms but a love triangle of sorts.

As an adult Ip Man meets Cheung Wing-Sing (Crystal Huang Yi) who holds a torch for Ip Man, even when hes away in Hong Kong at college and its during this period that Ip Man would meet Leung Bik (Played by Ip Man's real life son Ip Chun) where he uses his new found skills to adapt his stye of Wing Chun to incorporate his teachings.

Upon Ip Mans return his new found style does not go down well with Master Ching So (Yuen Biao) who believes the kicks should not be part of the Wing Chun Style.  Along with the love triangle and did I mention the Japanese trying to muscle their way into Chinese society with bribes and bullying, no well I just did, then this covers your plots and sub plots for The legend.

As I said at the start, don't expect the razzle dazzle and blockbuster production values of Donnie Yen's  Ip Man  films but there is a charm to this film you can't deny and some superb turns by Sammo Hung and Yuen Biao the latter getting some well deserved screen time.

The action doesn't disappoint with some tightly choreographed scenes and its nice to see Wing Chun shown on the screen again with Dennis To and Louis Fan putting in some fine turns, especially the Ninja scene which lets them really open up some whoop ass, I think I just used whoop ass, must be good then!

So all in all yes its recommended not in the same way as  Wilson Yip's movies that are like the mansion with the stunning views, but more like that little log cabin set in the forrest, Herman Yau brings a great little place to stop by put your feet up and enjoy a charming little take on a great man.

2 thoughts on “The Legend is born – Ip Man REVIEW”