Will this Action Comedy make you fly or will it be more likely that you'll bite the bullet!

Set in the 1920's Ma Dingbang (Ge You) is on the way to Goose Town to become governor when his train is hijacked by notorious bandit Zhang Muzhi.  Ma lies to Zhang that his is only the aid to the governor and Zhang decides to take up the position of the governor to steal the wealth from Goose Town.

Upon arriving at Goose Town Zhang followed by his bandits find out that Huang (Chow Yun-Fat) is actually the dictator of the town and rules the town by fear, presiding over his town from his impenetrable fortress, he rules over the town folk and lives a life of luxury. 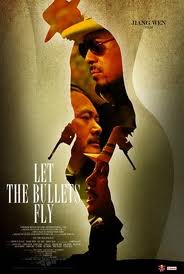 What follows this is Zhang and Huang playing a battle of wits, a game of chess if you will,  against each other to see who can get one step ahead of the other as Zhang plots to take  all of Huang's riches away from him and make himself and his bandits very rich men.

Simply enough you think but what ensues is a cat and mouse game that weaves an intricate story that you really have to watch when your awake as there's so many twists and turns you can't afford to take your eyes off the screen to often.

Ok a quick word of warning, if your looking for some kind of Chow Yun-Fat heroic bloodshed type movie then you'll be sorely disappointed this isn't that kind of film.  I'm just thankful I was told beforehand or the title alone would have suckered me into something which this is not, an action movie.

In saying that there is much to enjoy here as Wen Jiang and Chow Yun-Fat trade high velocity word play and to a lesser extent bullets, each of them trading blows in a master class of acting that hinges the whole film together. 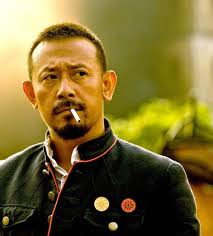 Wen Jiang was one of the writers, the director and brings another master class of acting to our screen its a pleasure to watch as he sets up his Bandits as ultra cool guys that he leads and gives Chow Yun-fat one of his best roles in many a year.

The comedy is there in abundance but never in a laugh at camera way but peppered within the story there are some stand out moments that make you just laugh out loud "I can't feel my ass" Camera zoom to tree with it hanging from a branch.  Its better when you see it! but its the kind of slapstick that is delivered deadpan and never detracts from the story.

This is a fantastic film and one that deserves repeat viewing, great cast, story and entertainment that will leave you hoping Wen Jiang takes up the offer and starts working on that sequel.

OUT 27th AUGUST 2012 from METRODOME DISTRIBUTION