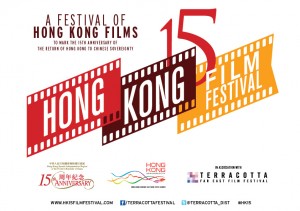 Hong Kong 15 Film Festival announces its much anticipated programme to mark the 15th Anniversary of the return of Hong Kong to Chinese sovereignty.

1st July marks fifteen years since Hong Kong returned to Chinese sovereignty. To commemorate this special occasion, the Hong Kong Economic Trade Office, London, in association with Terracotta Festival, has put together an exciting film festival to showcase the best of current Hong Kong films as well as to look back on the last fifteen years and beyond.

The Hong Kong 15 Film Festival will take place at the Odeon Covent Garden, London, commencing 2nd July 2012 for a fortnight until 14th July. With guests in attendance and fifteen films carefully selected, the festival will pay tribute to the extraordinary story of this vibrant and energetic island city through the eyes of its film-makers.

The diversity of Hong Kong cinema will be represented through a panorama of films divided in three sections:

The Festival will open with multi-award-winning drama, A Simple Life by acclaimed director Ann Hui, starring Hong Kong star Andy Lau and a comeback performance from the highly decorated Deanie Ip who won the Best Actress at the 68th Venice International Film Festival. The event will be attended by Roger Lee, the producer and writer whose life story the film is based on.

The Hong Kong 15 Film Festival wouldn’t even exist if it wasn’t for the legendary Shaw Brothers Studios and, as an homage to the most significant film production company in the history of Hong Kong Cinema, festival goers will be able to indulge in two martial arts masterpieces on the big screen: 1967 blockbuster One Armed Swordsman and one of the greatest Kung Fu film, The 36th Chamber of Shaolin (1978).

The Festival is extremely proud to be bringing the man widely credited as being the first Hong Kong Kung Fu star: legendary actor Jimmy Wang Yu

A world renowned star, famed in both Hong Kong and international film circles and a veteran of over 80 films since he joined Shaw Brothers studio in 1963, Jimmy Wang Yu was a vital part of the evolution of Hong Kong film.

The festival will be screening his latest film, Wu Xia on July 7th, as well as the classic that shot him to fame, One Armed Swordsman, July 8th, directed by famed director Chang Cheh; and he will be making a personal appearance at both screenings for an audience Q&A session.