This summer the eyes of the world will be on the London Olympics. 2012 is also the Year of the Dragon and the 2nd Chinese Visual Festival.

This festival of film, art and music will hold its Opening Gala on June 22nd, the eve of the Dragon Boat Festival, at the Free Word Centre in central London and will feature the UK premiere of the film Dragon Boat. 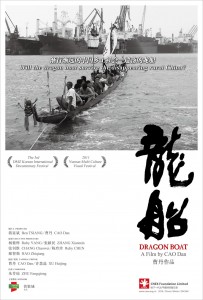 Dragon Boat is the latest film by acclaimed director Cao Dan. Through the ancient Chinese sport of dragon boat racing, the film tells the story of rapid economic development in modern China and the resulting disappearance of rural traditions. Cao Dan will be making a personal appearance at the Gala for an audience Q&A session.

The 2nd Chinese Visual Festival runs from 22nd June to 6th July 2012 across four central London venues with the theme ‘Run, China, Run’, tying in with the 2012 London Olympics. Hosting the 2008 Beijing Olympics has affected Chinese society profoundly, far more than envisaged. This year’s festival looks at the ‘aftershock’ of the 2008 Beijing Olympics through a variety of Chinese films and art. China is now racing forward as if modernisation and development are Olympic sports, and in the pursuit of speed and applause ‘Run China Run’ examines what we have gained and what we have lost.

The film section will feature 17 independent documentary films from China in 4 themed units, ‘August, Beijing’, ‘When Home is no Longer Home’, ‘Here and There’, and ‘Zhou Hao – The Constant Documentarian’. As well as Cao Dan for Dragon Boat, we will be welcoming several other directors for audience Q&A sessions, including Wang Bang for University City Savages on 27th June and Guo Xiaolou for Once Upon a Time Proletarian on 6th July.