No wires, no CGI - just real martial arts! That's the premise but will this film make you shout 'Kiai' or will you be giving it the chop, lets find out.

The story takes place in 1930's Japan where three students Giryu (Akihito Yagi), Taikan (Tatsuya Naka) and Choei (Yuji Suzki) study Karate at a dojo in the mountains under master Shibahara.  The Japanese troops turn up to take the dojo from them and the students take on the troops to defend the dojo and in doing so set their paths in motion.  After the unexpected death of master Shibahara Taikan with fellow student Choei go with the troops to teach them Karate while Giryu finds himself on a farm in rural Japan. 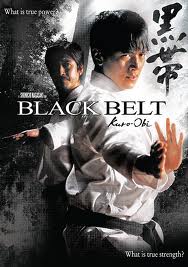 The fight at the dojo set the wheels in motion from Master Shibahara passing away and passing the black belt to student Choei who must choose which , if any, of his students deserve to wear the Black Belt.  Giryu and Taikan are both now on different paths with Taikan using his karate to eliminate the rival Dojo's across Japan and testing his skills.  While Giryu meditates in a small rural farm trying to  reconcile the events which led to him being there and understand how he can keep faith in his teachers philosophy.

Its a simple story with emphasis on Ying and Yang which may lead to self enlightenment.

So No wires, No CGI just real Martial Arts and it lives up to the tag, with the three main actors Akihito Yagi, Tatsuya Naka and Yuji Suzki all being actual Karate black Belts in fact I believe their 6th Dan!  Still you wouldn't guess it was their first film and they give memorable  performances as well as action. 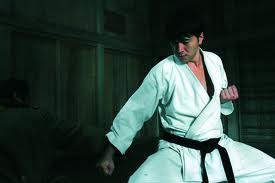 on film here but a very grounded realistic approach to the action which does justice to Karate as an art.  This slow burning film will draw you in as you follow the two main characters through a journey of self discovery and ultimately a battle not just against one another but a battle of self enlightenment.

Its nice to see a film such as this get a release and its a refreshing change to see something that provides a solid story and some hard hitting action that doesn't rely on anything but its main characters to deliver action that they can perform.

Black Belt is a welcome edition to any Martial Arts fans collection and any karate practitioners will be sure to enjoy even more the philosophy and sentiment embedded within this rich and passionate film.