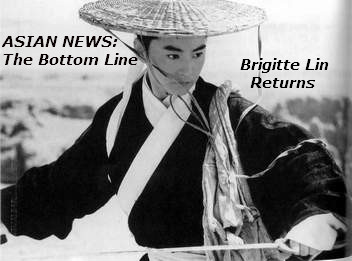 Brigitte Lin is coming out of retirement to play a role in director Zhang Yimou's upcoming film "Dragon Kiss", according to Chinese media. We last saw Brigitte in Wong Kar-Wai’s wonderful Ashes of Time back in 1994.

Jackie Chan is set to star in a new action comedy based on an original idea of Jackie Chan’s the story features a detective (Chan) who as to track down an American gambler that has skipped out on his debt owed to a Macau casino syndicate.  The settings will include Hong Kong, Macau, Eastern Europe and mainland china.

Jackie Chan will return to our screens in the Chinese Zodiac this December and heres some behind the scenes footage from Paris.

Donnie Yen also passed up a role in the fourth coming Expendables 2 feeling that the role he was offered just didn’t click. “I was flattered that I was approached by the producers but I just didn't see the role they asked me to do being that intriguing.”

Zhang Ziyi finally finished her part in Wong Kar-Wai's Kung Fu blockbuster "The Grandmasters" after three years of shooting. So question is will the film still be released on its December date, With Wong Kar-Wai you just never know!

I AM BRUCE LEE documentary out now on DVD and Blu-ray plus competition to win a copy of the I am Bruce Lee film and goodies HERE.

HIMIZU available on DVD & Blu-Ray  August 6th One of the most talked about Japanese films of 2012, ‘Himizu’ is Sion Sono’s biggest box-office success to date.

LOVE EXPOSURE available on DVD & Blu Ray August 6th One of the most talked-about Japanese cult films of the last decade finally makes its way onto blu-ray.