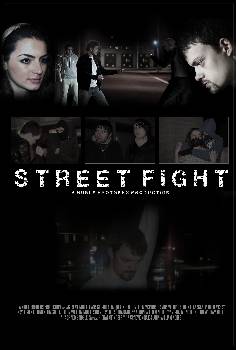 The Independent Scottish film makers who have several short and feature length movies to their name bring us 'Street Fight' its tournament fighting in Bonny Scotland.  Graeme Noble who plays Simon is less than Bonny, in fact hes a down on his luck drug addict whose desperate for cash and joins an illegal  fighting circuit.  The fights are shown on the internet and the stakes get higher as Simon Battles through his fights with an eye on the big prize.  As Simon is drawn in he'll not only have to fight for himself he'll also have to fight for his loved ones as things start to spiral out of control.

This is an independent film and with that comes a tiny budget but what the film lacks in budget it makes up for in  location, grit and some fine performances.  Liana Giugulea lights up the screen with a certain presence that captivates you, and Graeme Noble is the glue that holds the story together.

The fight scenes are good although short they do show that someones been watching their Hong Kong movies!!

Really all that's missing is a Brummy villain to complete the piece, I'll leave me phone on for that call !!!!

Its a great effort from all involved and hopefully it will get the recognition it deserves.  .