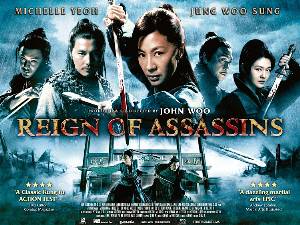 Will Michelle Yeoh take out the reign of assassins or will this film just rain on your parade. 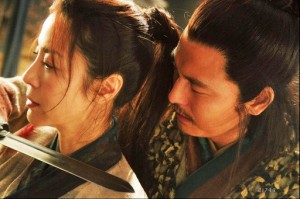 Drizzle (Kelly Lin), is a member of the assassins called The Dark Stone and master of the "Water Shedding Sword", she is part of a trio of assassins that also includes Lei Bin (Shawn Yue) and the Magician (Leon Dai), work for Wheel King (Wang Xueqi).  There sole purpose is to find the deceased body of Bodhi who was a Martial Arts Master and whoever poses both parts of his body would become the Master of the Martial Arts world.  After finding the body and killing the guardians of the deceased Bodhi, Drizzle takes half the body with her and changes her face and name.

In a quiet town Drizzle has now changed her name to Zeng Jing (Michelle Yeoh) and lives a quiet life away from the Assassins and soon settles down with unassuming and quiet man that is Ah-Sheng (Jung Woo-Sung).  Her life of tranquillity is soon shattered as the Assassins find where she is hiding 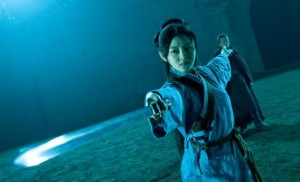 and plan to take the other half of Bodhi back and also kill Zeng Jing.

Riegn of Assassins delivers on every level with Michelle Yeoh giving her best performance since 'Crouching Tiger, Hidden Dragon'  in role that shows her comedic, dramatic and action skills.  The story is a simple one and also one that western audiences will be able to follow with ease.

Reign of Assassins has an old school feel to the film but with some up to the date production values with cinematography and music being the highlights.  The story and characters are both engaging with each Assassin getting a layer of personalisation that draws you into their worlds both within The Dark Stones and outside of it.

Reign of Assassins is a film that any Michelle Yeoh Fan should put straight to their 'MUST SEE' list and for everyone else its a film that shows what Asian cinema is all about and that's great storytelling, characters and action that will reign you in.

Co-directed by King of Action John Woo and starring the stunning Michelle Yeoh, Reign of Assassins leaps on to DVD on 25 February 2013! Described as ‘the best wuxia since Crouching Tiger, Hidden Dragon’ by The Global Times, and awarded 4 stars by Empire, this period-set martial arts actioner combines the action-comedy and romance of Mr. & Mrs. Smith with the identity swap thrills of Face/Off and is an absolute must-see! 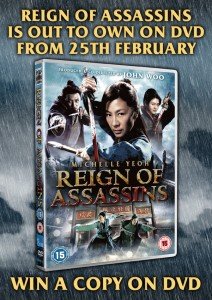 To celebrate the release of Reign of Assassins we’re giving away a copy on DVD courtesy of eOne!

To win a copy on DVD please tell us your favourite Michelle Yeoh Film?

Send your name address including postcode entries to econdor@easternfilmfans.co.uk