Fearless: The Story of Chin Woo Kung Fu examines the legends and the facts behind one of the world's largest martial arts organisations. As well as exploring the legend of the founder, Huo Yuanjia, known as "Fearless", the author looks at how the Chin Woo (Jingwu) Association revolutionised martial arts at the turn of the twentieth century. Find out how Chin Woo expanded throughout the world, spreading it's philosophy and concepts. Learn how Bruce Lee helped Chin Woo become one of the most well-known and popular kung fu schools in the 1970's. Discover the fundamental kung fu forms and weapons of the Chin Woo style. The author, Glen Stanway, also traces his personal martial arts lineage, from the original Shanghai school, to the famous Yap brothers in Malaysia, and his own kung fu teacher, Master Teng Wie Yoo. Illustrated with over one hundred photos, the reader is taken on a fascinating journey from Qing dynasty China to the present day and beyond. 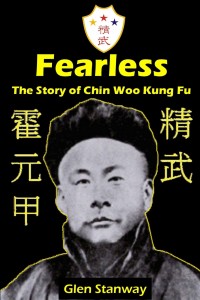 So that's the blurb but what about the read, what about as a reader or a person who wants to understand more about Chin Woo Kung Fu or even the founder himself Huo Yuanjia.  The book is set up very well, as it give you an understanding early on about the history of, not only the Chinese Martial Arts, but also the dynasties which I really felt gave you a grounding, an appreciation if you will, that is useful as you read further.  The book dives into the stories about Huo Yuanjia and Chin Woo and his life story that really is quite fascinating on how Chin Woo Kung Fu came to be and the impact that Huo Yuanjia had and still has to this day.

There is only so much background you can discover on people and Glen tries to find the truth from the fables and the man from the myth and he does a great job of trying to get to the core of the truths and not leaning towards the fanciful side of the stories that surrounded him.  I particularly enjoyed some of the sayings that encapsulate Martial Arts one such being "Train both the internal and external.  External training includes the hands, the eyes, the body and stances.  Internal training includes the heart, the spirit, the mind, breathing and strength" 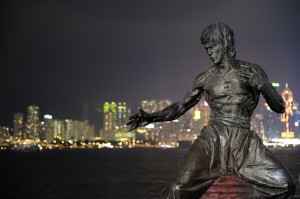 We also get an insight into more than just the Bruce Lee connection, with Jet Li's 'Fearless', 'Fist of legend' and countless connections to other films being explored, which begs the question on why a film that truly represents the life of Huo Yuanjia has not been fully realized.

There is so much more to this book than just the title leads you to believe. The core of the read and central to it is Huo Yuanjia but its wide spread appeal of Chin Woo Kung Fu and the lives its touched, including its author, really is remarkable.  If you enjoy a great read on a subject matter you love, the Martial Arts, then I can't recommend this enough, its a great insight into a man, a myth and one would certainly categorize as a legend that brought Chin Woo Kung Fu to the masses.