Its exactly what I wanted to do, I sort of have a marketing problem, when you mention Kung Fu movie  most people think funny and at most dramatic they think Kill Bill and I'm a completely different person I want this to be more of a Seven Samurai that’s the kind of stuff I'm into that’s  the kind of drama I want to make and in terms of getting people invested in the story and the characters. I wanted first half of the first episodes to have no action and people like you and me are forced to have to wait for it.  The bottom line is it has to be good with no fighting, if you took the fighting out and the settled their differences with chess or something, it would still have to be a good story.

So when you thought, Streets of Myth I’m going to promo this, was your thought about how that was going to be done?

Over the course of a year id already had the brief outline of scripts and I can’t just go and ask for money to invest in this I have to show something, I have to take a risk and put something out there that’s of a quality that people will hang on to and show myself.   I thought of lots of different ways to do it, I don’t want to do a cheap version of an episode, it’s too close to my heart, as you noted the dialogues really important, the first ten minutes if the dialogues delivered badly, if you don’t have a good actor in there it’ll be terrible you’ll stop watching in sixty seconds.  So the idea originally was going to be more like a trailer but then after many different ideas I settled on more story based, making it more interesting. 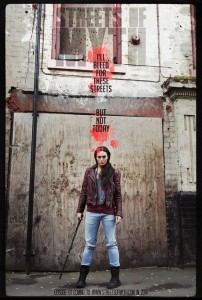 How did Zara and Beau get involved?

I sent Zara and Beau the scripts and Beau’s a huge fan of the genre and he got it right away and he was one of the first people I pitched it to and understood what I was doing from the word go.  He’s a very good film-maker himself and he pushed me, show me more, pushing the characters.  The voice-over on the promo was there all the time, when it was just a teaser it just showed them walking with Chinese weapons in a modern world, the emotions of these characters is their little universe that people are so loyal to their home block, and that sense of loyalty is problem in their universe and that was part of the voice-over. 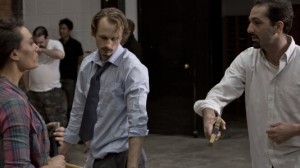 The fight went from an outside to an interior space and then I came up with the idea that it was a festive atmosphere because it just made sense.  The story of the teaser is based of  Irish gypsy bare knuckle boxing, they tend to resolve feuds with the  toughest guy from one group and the toughest from another who meet up in neutral surroundings and neutral crowds and fight for no reason but to say I'm better than you and then call it a day.

If this kick-starter works it’s because I got them (Zara, Beau) without them it wouldn't have worked.

What can the readers expect from investing in this project?

The first episode I didn't want to make something explosively ridiculous I wanted to set the stage, so what they can expect is some interesting characters, some funny dialogue, which is not in the teaser at all, Breaking Bad, Game of Thrones, Sopranos, The Wire which I’m really inspired by, their spine is dead serious drama but the flesh is funny you laugh as much in those as you do in sitcoms.  You’re going to see filming in a real Birmingham Pub and introduced to the basic mechanics of the Streets of myth , a little bit more than you did in the teaser.  What I wanted to do in the first episode is that if someone was totally divorced from Facebook, Twitter and the teaser and just watched it I want them to think it’s like a Guy Richie or a Danny Boyle film a normal British gangster film and then the swords come out, so the way it’s written is for people that don’ know what’s coming to be surprised.  The whole second half of the episode is a brawl in the pub like a mash up of Trainspotting and Crouching Tiger Hidden Dragon.

You’re going to Zara in a meatier role than she has ever had and when you see her given that space to be that kind of performer she is then that will excite people a lot. Your going see Beau’s Fight choreography back with a whole lot more talent and resources  and one guy versus 15 or 10 they’ll be a whole lot of broken glasses, bottles,  pool cues and it  ends on the promise of full on Wu Xia, the last shot is a flying shot and ends on a cliff hanger.

This is about the promise of the whole thing if you can move it into being a whole series that is exciting to me and hopefully exciting to the backers more so than one good episode and one good fight scene.