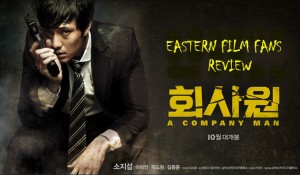 A company Man brings a whole new meaning to clocking out, but will your time be spent well watching this Korean Thriller or will you be clocking out out early?

So Ji-Sub plays Hyung Do who is a professional assassin that is sent out to complete a hit on a target and uses a young wanna be gangster Ra Hun (Kim Dong-jun) to complete the mission and then has instructions to kill Ra.  Before doing so Ra asks So to deliver some money to his mother Su Yeon (Lee Mi-Yeon)  to take care of her.  When Hyung finally meets Su he realises that she was a singer who he used to listen to as a child and takes an interest in her and he family.  Hyung is a loner, a man who works for the company by day and sits alone at night a man devoted to his job but now starts to question his life with the company. 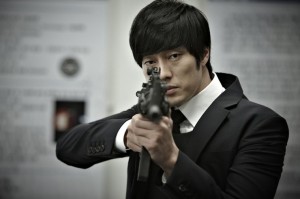 Hyung having saved Su Yeons's sons life and questioning a hit on a former company man has now become a target himself and he must try and leave the company and protect Su Yeon and family, but as Hyung is about to find out, leaving the company is not something that is as easy as he thought.

A company Man is another Korean thriller that actually thrills you.  With the first three quarters of the movie peppered with violence but fleshes out the characters so that you care about the hows and whys of the situation they are forced into.

So Ji-Sub plays the main character with a silent strength that probably few could pull off and deserves credit for the way he brings the character to life without the use of as many words and more a use of his mannerisms and gestures.  The film itself is a clean, lean, killing machine that deserves is plaudits even if the finale is over familiar if not unique in its execution.