The Bombing is on UK DVD & Digital HD in 29th October

When the Allied forces faced off against the Japanese in WWII’s Pacific War, it led to some of the bloodiest and most ferocious fighting seen anywhere at the time. Officially considered to have started in 1941 when Japan invaded Thailand, attacked Britain in Singapore and Hong Kong and eventually bombed American forces at Pearl Harbour, the fighting would last until the surrender of Japan in 1945. 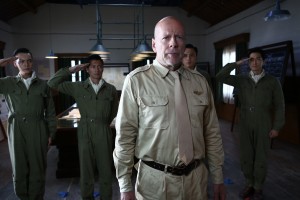 Set during this time and inspired by the heroic, untold true story of Chongqing, China, new WWII movie The Bombing stars screen legends Bruce Willis (Die Hard, The Expendables) and Adrien Brody (The Pianist) in an incredible tale of honour and immense bravery.

As U.S. Air Force commander Jack Johnson (Willis) trains Chinese aviators to battle Japanese fighters, a hot-headed pilot begs to fly a powerful bomber that could stop the attacks. Meanwhile, a team of spies and refugees must carry a game-changing decoder device through the war-torn countryside. The Bombing portrays this historic conflict in a thrilling new light.

The Bridge on the River Kwai (1957) David Lean's The Bridge on the River Kwai is regarded as one of the greatest films of all time, netting seven Oscars at the 30th Academy Awards including Best Picture. It tells the story of British Colonel (Alec Guinness) who's being held in a Japanese POW camp during WWII. After reconciling with his captors, the Colonel instructs his men (also under lock and key) to help the Japanese build a railway bridge in Burma. But what the British captives don't know is that the Allies have a plan to destroy the Bridge. The film was shot on location in Sri Lanka over 8 months in 1955, after a scouting party had decided that the real river Kwai was not a dramatic enough site to tell Lean's monumental story. The bridge seen in the film cost a whopping $250,000 to build and it was started before the film was even cast. For an epic war drama from a true master of cinema, you need look no further than The Bridge on the River Kwai.

Merry Christmas, Mr Lawrence (1983) Nagisa Ôshima's award-winning Merry Christmas, Mr Lawrence tells the heart-wrenching story of a Colonel John Lawrence a prisoner in a Japanese POW camp. Lawrence believes the Japanese to be cruel and heartless and his captors view the British prisoners as weak traitors, but perspectives are turned upside down when new inmate Jack Celliers arrives in the camp, bridging the divide between the two sides. David Bowie stars as Celliers, in one of his greatest cinematic roles. The film has been compared to David Lean's The Bridge on the River Kwai for its dramatic tale of a POW camp. And much like Lean's film which custom built a bridge, an entire POW camp was built for Merry Christmas, Mr Lawrence, so the cast could feel fully immersed in the story. It is tough to watch some of the cruelty that occurred during this horrifying chapter of history but what shines through is a moving and timeless tale of courage and friendship

Empire of the Sun (1987) In terms of war films, Steven Spielberg is known for his epic blockbusters Saving Private Ryan and War Horse, however in the late 1980s he directed a lesser-known gem about WWII titled Empire of the Sun. The film was adapted from a novel by author JG Ballard (who even has a cameo in one scene) and tells the story of a young English boy called James Graham who is torn away from his wealthy family home in Shanghai and locked up in a Japanese POW camp. Christian Bale played the part of Graham, giving an astonishing performance in one of his earliest ever movie roles. Although David Lean had originally wanted to direct, the task eventually fell to Spielberg who turned out a critically acclaimed modern classic that was nominated for six Academy Awards. Empire of the Sun can easily stand shoulder to shoulder with the very best of Spielberg.

The Thin Red Line (1998) The Thin Red Line tells a fictional account of the Battle of Mount Austen, a conflict thatformed part Guadalcanal Campaign during the winter of 1942-1943. The film stars a string of Hollywood A-listers including Sean Penn, George Clooney, John Cusack, Bill Pullman and JohnTravolta, in an emotionally-charged saga that reflects on the pointlessness of war. To realise his vision, Malick adopted some unconventional filmmaking techniques, for example he would shoot every scene a few times under different light conditions and then edit together the ones that worked best later on. Although unorthodox, his techniques were applauded, particularly by actors Woody Harrelson and John Savage who both stayed on set for a month after they'd had finished shooting to watch the director at work. The Thin Red Line marked Terrence Malick's return to filmmaking after a 20-year hiatus and he certainly re-started his career with a bang. The film was a critical success, winning seven Academy Awards and scooping the Golden Bear at the Berlin Film Festival. An unmissable war film that will stay with you long after the credits roll.

Flags of Our Fathers / Letters from Iwo Jima (2006) This ambitious project came courtesy of Hollywood legend Clint Eastwood, donning his director’s cap to tell the true story of the Battle of Iwo Jima from two very different perspectives. Flags of Our Fathers is told from the viewpoint of the US forces tasked with taking the heavily fortified island of Iwo Jima in one of the most brutal engagements during the vicious Pacific War of WWII. Ryan Phillippe, Paul Walker and Jamie Bell play just some of the soldiers who fought and won the battle, eventually hoisting an American flag in victory, a picture of which would boost the nation’s morale but lead to a lingering controversy for the men captured in the image. Letters from Iwo Jima portrays the battle from the Japanese perspective, and is a grueling, bloody account of war from start to finish, as it follows Private first class Saigo as the Japanese Army fights its way to inevitable defeat. Letters from Iwo Jima, more successful than its companion film and made on a significantly smaller budget, was nominated for four Academy Awards including Best Picture and Best Director for Eastwood.

Unbroken (2014) Based on the non-fiction book by Laura Hillenbrand and with a screenplay co-written by the Coen Brothers, Unbroken follows the incredible true-life story of Louis “Louie” Zamperini and his heroic actions during the war in the pacific. Jack O’Connell takes the role of Louis, who grew up as a young tearaway before eventually getting his act together and becoming a distance runner who would make it all the way to the 1936 Olympics. Unfortunately, his career would be displaced by the war. Flying as a bombardier, the young runner’s plane goes down in the ocean where it’s eventually picked up, after a miraculous 47 days at sea, by Japanese sailors. Taken as a prisoner of war, Louis faces incredible cruelty at the hand of his Japanese captors, in particular the sadistic Japanese corporal Mutsuhiro Watanabe. Angelina Jolie directed this powerful biography, that would face harsh criticism in Japan from the ultranationalistic right-wing, who attempted to block the film’s release. If the film had trouble reaching Japan, Louis didn’t. The former Olympian returned to carry the Olympic torch at the 1998 Winter Olympics in Nagano, before dying at the ripe old age of 97. What a champ!

Hacksaw Ridge (2016) Hacksaw Ridge is one of a few war films to examine conscientious objection, focusing on the true story of American pacifist Desmond Doss (played by Andrew Garfield), who served as a combat medic in WWII. The centrepiece of the film concerns the campaign that took place at the Maeda Escarpment (Hacksaw Ridge) during the Battle of Okinawa. After the war Doss received a Medal of Honor from Harry S. Truman for his bravery during the battle. Gibson has said the film's many nail-biting battle scenes were influenced by the horror stories he heard from his father when he was a child, as his father had served in the Pacific. Hacksaw Ridge marked Mel Gibson's return to directing after a ten-year break, following his previous film Apocalypto (2006). Gibson said that the battle scenes were influenced by nightmares he had during his childhood, when his father Hutton Gibson, a World War II veteran who served in Guadalcanal in the Pacific theatre, described the horrors he witnessed as bedtime stories. It is an awesome and brilliant piece of war drama and totally deserving of its six Oscar nominations. 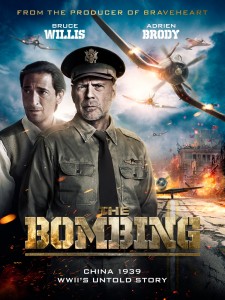