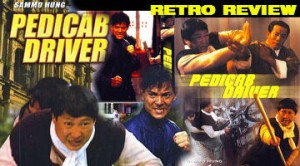 First up in our new feature is the 1989 Sammo Hung vehicle Pedicab Driver.  So will the 80's action you love still hold up to todays wire-fu or will it just take your fare and drop you back in the present?

The story revolves around  Lo Tung ( Sammo Hung) and Malted Candy, yes that's his name! (Max Mok ) who are a couple of happy go lucky Pedicab Drives in Macau who both fall for different women that make there lives a little more interesting than they were.  Lo Tung falls for Ping (Nina Li Chi)  a baker who is also the object of Fung the Master baker (I've always wanted to use that phrase in a review) affections.  This leads to Lo Tung protecting Ping from The Gambling House Boss Lau Ka-Leung and they fall in love. 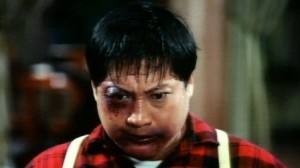 Meanwhile Malted Candy pines for the affection of a fare he picked up, well ran over, Hsiao Tsui (Fennie Yuen) who turns out not to be all she first appears and courts the attention of the evil crime boss Master 5 played brilliantly by John Sham.  Things take a turn for the worse as malted Candy and Hsiao fall madly in love and master 5 and his gang won't let them have the peace and quite they imagine and so sets the scene for one of the most breath taking finales ever put to film. 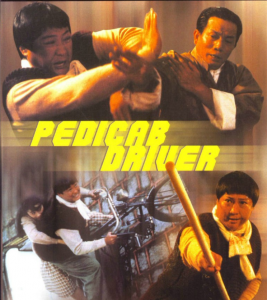 I probably gave away my thoughts on Pedicab Driver on that last sentence also you can here myself and Podcast On Fire talk HERE about the film.  The question you have to ask yourself is, do you like your action, if you do welcome to heaven my friend.  Two of the greatest ever on screen battle stake place first up, and in some peoples opinions, the best out of the two a fight between the young Sammo Hung and the legend that is Lau Kar-Leung, trading blows in a powerhouse performance from both that shows Sammo's pure power and lau Kar-leung's pure elegance.  Secondly a brutal fight at Master 5's home that shows Billy Chow taking on Sammo Hung in a flurry of Punch and Kicks that will literally have you flinching with the barrage of blows that rain down.

Throw in some great performances especially John Sham who plays the part of the evil Crime Boss, and Billy Chow who even though he doesn't say a single word throughout the whole movie still sends chills down your spine especially in the climax to the Max Mok fight scene.

So I have it 4, twenty yeas ago I may have said 5 but there's still some plodding of storyline to get through until you reach the pearls of beauty that are the action sequences.  Overall though Pedicab Driver is a beauty to behold for its mixture of comedy, drama, slapstick and pure rage.  Sammo Hung made something very special so own it, buy it, borrow  it or steal it but defiantly See it.