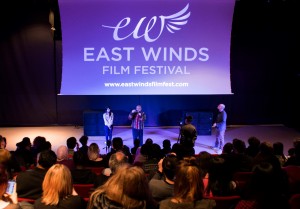 The fifth incarnation of the only major film festival of East Asian cinema outside of London and the first of its kind in the Midlands will be kicking off in Coventry from the 15th to the 19th of May. This year’s bonanza of East Asian cinema will be organised with the help of students drawn from Coventry University’s Communication, Culture and Media MA.

In a first for East Winds, the festival will aim to be a truly immersive and open experience, featuring a range of digital broadcasts with the latest news and information directly from the festival. Screenings will be supported by live broadcasts streaming daily, with interactive digital content across all of our social media platforms, allowing our audience to engage and interact with content and be part of the East Winds experience.

Co- Director Andreea Dascalu shared her thoughts on this year’s festival: “We’re thrilled to once again put a spotlight on popular East Asian cinema in the UK. To mark our fifth anniversary, we’re also delighted to introduce an interactive element to the festival, making it more accessible to everyone, whether they’re at home or on the go.” The festival has a tradition of bringing together the cream of East Asian popular cinema with a host of International, European and UK premieres. Among the most notable screenings were Tetsuya Nakashima's 'Confessions' (Japan's entry at the 83rd Academy Awards), Dustin Nguyen's 'Once Upon A Time in Vietnam' and Nithiwat Tharatorn's 'The Teacher's Diary' (Thailand's entry to the 87th Academy Awards).

We have also had the pleasure of welcoming special guests including legendary Hong Kong directors Herman Yau and Clifton Ko, award-winning Japanese filmmaker Miki Satoshi, Thai directors Nithiwat Tharatorn and Sophon Sakdaphisit, as well as rising talent such as actress Michelle Wai and many other notable names from the East Asian film industry. This year promises even more star power. Coventry University’s state-of-the-art, 3D capable, Square One cinema will be the main venue playing host to a veritable feast of unforgettable film entertainment. East Winds is building on the successes of its previous years and with our new and dedicated team, as well as the expanded interactive format, audiences are guaranteed a truly unique experience at an event not to be missed.

More details will be announced in the weeks to come, including the full festival programme, guests and much more.