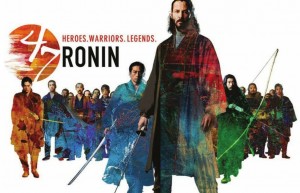 A story of revenge, love and honour, 47 RONIN is based on the fictional story of the forty-seven Ronin, a real-life group of master-less samurai who in 18th-century Japan choose to avenge the murder of their master ,47 Ronin slices and dices its way across the screen but will it evoke your warrior within. 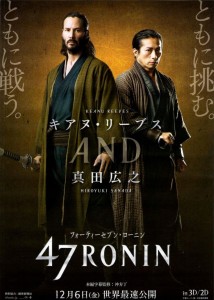 Set in 18th century Japan Keanu Reeves plays Kai an orphan who was raised by demons who is spared death by Lord Asano (Min Tanaka) and raised by him.  As he grows up in the family he becomes close to Lord Asano's daughter Mika (Ko Shibasaki) but due to Kai being an outsider they both know that they may never be together.  Things turn ugly when Lord Kira (Tadanobu Asano) and his partner in crime the witch (Rinko Kikuchi) plot to kill Lord Asano and in doing so Lord Kira takes Mika to be his wife and banishes the Lords Asano's samurai that includes General Oishi (Sanada Hiroyuki) and sends Kai into slavery.

Oishi who is now a Ronin (A Samurai without a master) now has but one goal to find his men and Kai and to save Mika and undo the wrong that has been done and restore his honour.

Ok firstly 47 Ronin is a visual feast with a mix of myth, legend and Bushido with 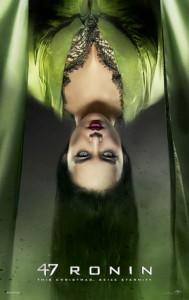 Demons, Witches and Dragons bulk up the cast  and that's what makes this a little different from your normal run of the mill Samurai tale.  Its aimed at the Harry potter crowd to some extent so don't expect a blood fest ala Takashi Miike 13 Assassins.

Keanu Reeves is a samurai and if Tom Cruise can do it why not, yes ok its Keanu get over it, he does ok, solemn, broody, he can do that the real treat is obviously Sanada Hiroyuki who delightfully gives the best performance as the leader of the 47 Ronin.  Also a mention to Rinko Kikuchi as the demon Witch who sneers and transforms to many a beast on screen.

47 Ronin isn't for everyone, those purists will harp on about the original 47 Ronin of which this is loosely based, but anyone who likes there Pirates of the Caribbean or a darn good romp of a movie may find an entertaining film with a Zen like ending “As everything in this world is but a shame - Death is the only sincerity.”