Wind Blast aims to be an Eastern Western movie, but does it live up to the  rooting tooting premise it sets out to be ?

The story involves Zhang Ning (Xia Yu) who takes a job to kill a man in Hong Kong but also takes a picture of the man who hired him.  Zhang escapes and ends up with both the police and assassins after him.  Xiang Xi (Duan Yihong),  He 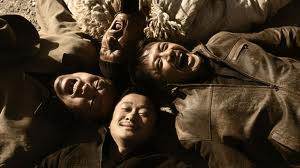 Jianzhong (Ni Dahong), Yang Xiaoming (Wu Jing) and Han Chaodong (Zhang Li) are the officers who catch up with Zhang who has now hooked up with his pregnant wife Sun Jing (Charlie Yeung) in the deserts of china.  Their mission is to bring Zhang to justice but first they must save them from the assassins  Mai Gao (Francis Ng) and Anuo (Yu Nan)  sent to retrive the picture and silence Zhang.

I feel somewhat let down by this movie, in regards to the overall film itself, as it  felt less than what I'd bought into.  Maybe this was due to the confusing opening minutes and although visually sound and some nice moments with sweeping camera angles taking you to the vast desert surroundings the plot seemed a little convoluted.  Also the fact that Wu Jing gets very little action wise to do, and although there are a couple of scenes, the first very brief, but gives you hope of something special then falls flat in the next sequence and maybe this was just how it was edited from back and forth shots to varies people in danger. 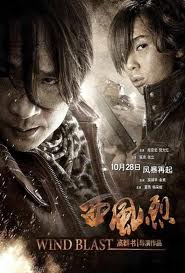 The real cat and mouse chase is The Leader Xiang Xi (Duan Yihong) and The Assassin Mai Gao (Francis Ng) that ends up as a Mexican stand off as the finale with a nice touch or in fact twist to it.

This isn't a bad movie although i suspect alot of people may disagree I just feel that its a disappointment from a director who has done so much better.  As said before there are some nice visuals here but the lack of depth to the characters and the action sequences just let this down.

Still now you've read this review you may find that you enjoy this more as a certain level of expectation has been lifted and I think this may actually help this movie be enjoyed for what it is rather than what it should have been.

So sit down, switch off and have yourself a blast, it may not be the Eastern Spaghetti Western you were hoping for but theres much to enjoy once you remove that level of anticipation.