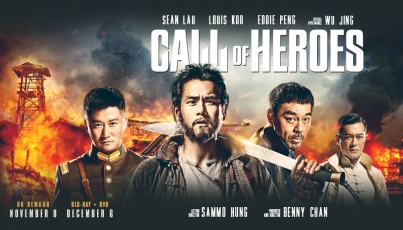 WIN CALL OF HEROES ON BLU-RAY

To celebrate Cine Asia’s grand return with CALL OF HEROES – Available from Monday 2nd January 2017 on DVD, Blu-Ray and VOD, we have a Blu-Ray copy to give away courtesy of Cine Asia.  Check out the trailer opposite. 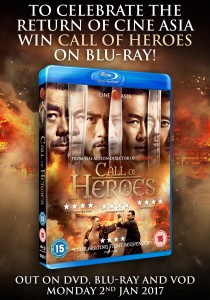 Call of Heroes thrills throughout in its tale of skilled martial artists, who take a stand to protect their village against a ruthless army. In 1914, after the collapse of China's Qing dynasty, Yang Kenan (Sean Lau Mad Detective) is appointed as guardian to defend the rural village of Pucheng. After Yang arrests the son of a sadistic warlord, Cao Shaolun (Louis Koo Flash Point), the warlord’s army threatens to bring death and destruction. As the odds for peace lessen and the pressure mounts for Yang to release the murderous captive, a stirring tale of heroic resistance unfolds.

All you need to do to win is send us an email  to econdor@easternfilmfans.co.uk telling us your favourite Benny Chan film with your name and address and the winner will be drawn on 9th January 2017.

Terms & Conditions
- Competition to run until 8th January 2017
- Prize for 1x winner is 1 x blu-ray of Call of Heroes
- There is no cash or other alternative to the prize stated and the prize is not transferable and no part or parts of the prize may be substituted for other benefits, items or additions.
- The winner will be picked at random. The prize will be delivered to the winner within 28 days of confirmation of delivery address.
- The Editor's decision is final and binding on the entrants. No correspondence will be entered into.
- The promoter of this competition is Fetch Dynamic Ltd.
- Winners will be notified by email
- Open to UK entrants only
Tweet
Tags: Benny Chan, Call of Heroes, Cine Asia, Louis Koo, Sammo Hung, Sean Lau, Wu Jing