Eastern Film Fans are proud to present an interview with Mr Vincent Lyn who showcased his martial arts prowess with such icons as Jackie Chan, Cynthia Rothrock and Yukari Oshima  and whose credits include Tiger Cage 1&2, Operation Condor, Outlaw Brothers and Miracles.  Not only an accomplished Martial Artist on and off screen but also a talented musician Eastern Film Fans welcome Mr Vincent Lyn.

Q. Can you give our readers some background on how and what inspired you to take up Martial Arts? 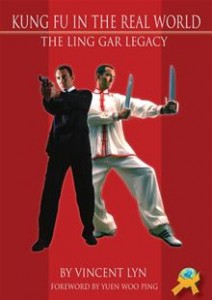 The main reason was perpetuating the family lineage of Ling Gar my family's style of Chinese Martial Arts which dates back to 1368. Of course it cannot be told that one of my main influences was my Uncle Abak who was the last
Grandmaster of Tai Chi & Qi Gong. He had an enormous influence on my dedication to my formative years of practice. Also because of his paramount skill in the internal arts and healing powers of Chinese Medicine I knew I was
destined to follow in his footsteps.

Q. So how did you find yourself in Hong Kong Action Movies?

I could say I sort of stumbled upon it. There's probably not a martial artist on the planet that hasn't dreamed of being in Hong Kong action films. I surely was one of them. A well known NYC photographer who had shot some photos of me threw the idea at me and said sure it sounds great but how? He contacted an art director friend in Hong Kong who I met and he then put me in touch with 4 film companies of which one was in production of the film Tiger Cage I know it sounds like it was easy but its the furthest thing from the truth. I had to take the trip across half the globe and interview with these companies and then try to impress Yuen Woo Ping which was no easy task. But initially he didn't make the decision right away. It took another trip to Hong Kong on my own dime before he offered me the part. The rest is history.

Q. What memories do you have of Tiger cage which was directed by the famous Mr Yuen-Woo-ping and starred the 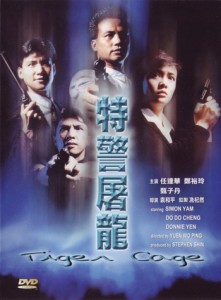 There are so many especially it being my first Hong Kong film which as you know was Yuen Woo Ping's comeback film since catapulting Jackie Chan to stardom with Snake in the Eagles Shadow and Drunken Master. I will say this one thing that stood out in my mind and always remembered was what Simon Yam told me in confidence. And that was no matter what the film was, how big or small the part never ever turn down the part. Take everything and work as much as possible and do the best possible job I can, because its not going to last. He was of course talking about the Hong Kong film industry's Golden Age and he was right on. I never forgot that and took his advice and because of that was involved in every facet of the entertainment industry in HK Acting, Modelling, Theatre, Dancing, TV commercials even composing for Polygram Records.

Q. The next film was Blonde Fury with the wonderful Cynthia Rothrock and some great action set pieces how was it working with The Blonde Fury herself? 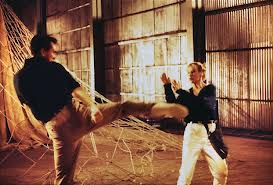 I loved working with Cynthia she's an extremely talented and an excellent martial artist with amazing control and we've remained very close friends throughout the years. Giving seminars at events all over the world.

Q. You had the great fortunate to work with some many greats in the Asian action world and you got to go toe to toe with Jackie Chan in Operation Condor, How long did it take to shoot that end fight scene?

Well just the fight scene in the wind tunnel took 39 days  of 12-14 hour days, but over many months including many more weeks of extra shooting other scenes.

Q. So with 25 films under your belt what memories do you have of your time in the movie world and any desire to make 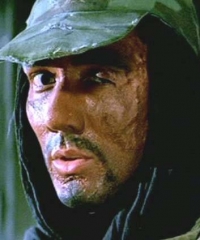 It was a very wonderful experience and I have fond memories which will stay with me forever. What was great is that I made life-long friends with whom I still work with. Even very recently competing in HK in Oct, 2012 in the biggest Asian original song contest. My HK partner who was Yuen Woo Ping's business partner for 30 years.

Q. You’re not only a talented Actor but also Musician where did your passion from music stem from?

That's an easy one I got both talents from my family. Kung Fu from my Father and Music from my Mom!

Q.  I hear congratulations are in order for your new album ‘WingSing’ which has received FOUR Nominations in the Grammy Ballot for the 55th Grammy Awards to be held in February of 2013, you must be very proud?

I am its quite crazy really. Though I didn't get into the Final 5 of which will be decided in Feb just to get nominated alongside some of the biggest names in the Music scene is pretty cool.

Q. Finally the Eastern Film Fans question is if you were on a desert island and could only take 3 films with you what would you take? (It can be any genre)