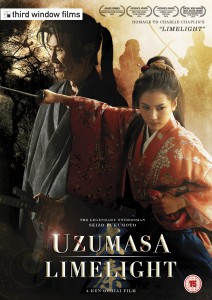 A film by Ken Ochiai (Tiger Mask, Ninja the Monster)

Synopsis
Uzumasa (Kyoto) is considered the Hollywood of Japan.
It has produced many “jidaigeki” films (period dramas with sword fighting) that are loved by many Japanese, and are highly praised all over the world. These films wouldn’t be what they were if it weren’t for the “kirareyaku” (actors whose main job is to be killed by the lead star). Men who are killed, without ever being lit by the limelight…
This story is about those men, the unsung heroes of classic jidaigeki films. They loved and respected the art, even when the production of classic jidaigeki films began to dwindle. Using Charlie Chaplin’s film “Limelight” as an underlying theme, the admirable story of these men dealing with a new generation and fading craftsmanship is told with melancholy and soul.

Starring: Seizo Fukumoto – The actor who is said to have died 50,000 times!
(The Last Samurai, The Last Chushingura)
And introducing: Chihiro Yamamoto
Japan / 2014 / 103 Mins / In Japanese with English subtitles / DCP / Colour

Featuring a behind the scenes featurette and theatrical trailer!

amzn.to/3oTpQWL Not Ordered The Deluxe Limited Edition of The Young Master yet? Then use our Affiliate Link to order now! Looks like another @88_Films super release. #AffiliateDFP

So New Year, new podcasts to prepare for. Something very special for you folks, can you tell what it is yet. @PodcastOnFire #wongorwrong #podcasts @88_Films pic.twitter.com/f5dJ…