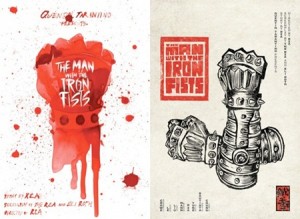 The Man with the Iron Fists explodes onto our screens but does the film punch above its weight or is it RZAonably good! 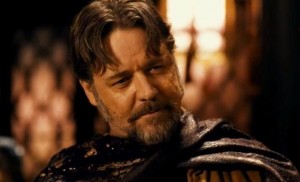 When Gold Lion (Kuan Tai Chen) is killed by his own son Silver Lion (Byron Mann) for a shipment of gold, warriors, assassins and government descend upon Jungle Village to retrieve the gold.   The characters are many Zen Yi (Rick Yune) seeks revenge for his fathers death, Jack Knife (Russell Crowe) a man of mystery also enters the fray.  Brass Body (Dave Batista) is recruited by Silver Lion and Madam Blossom (Lucy Liu) runs the local brothel where most of the story takes place.

The hero of our tale is a man of no name who goes by the name of Blacksmith (RZA), a runaway slave who jumped onto a ship called destiny and ended up in this backwater town. 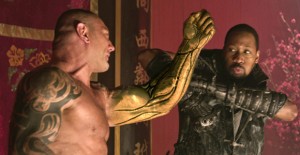 Blacksmith forges the weapons that are used by the clans and assassins alike and he regrets the bloodshed that he has on his blades and his hands.

Things take a turn for the worst for our hero the blacksmith and he must then forge his greatest weapon of all, and to fight injustice he shall be, The Man with the Iron Fists.

You get where Im going with this review, its a throwback to the 70's with a nod to many a genre of movie from Blaxploitation to the Shaw Brothers classics with a splash of steam punk in the mix.  It actually works as a 90 minute feature film and it was rumoured to be over 4 hours long at some stage but with some editing its made to feel like a fast and furious fun filled roller-coaster ride. 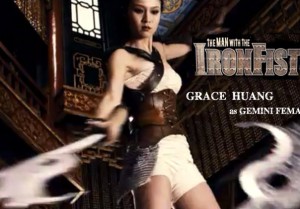 There's some great turns in a film peppered with moments of joy, take the Gemini twins played by Grace Huang and Andrew Lin, where Grace gets to show off her screen prescience in a stand out fight fest that has her thrown from one side of the screen to another in a whirlwind of death and destruction.

Russell Crowe gets to chew on his dialogue as Jack Knife with all the suave and sophistication of an English gent with a secret agenda.

Its a shame Gordon Liu and Andrew Ng didn't get a little more on screen time but I guess that's just down to pacing the film.

Overall its a fast paced homage to films of yesteryear with cameos galore and a real sense of fun.  The Man with the Iron Fists will smack you up and leave you with a sense of wanting more.  Still you can always revel in a Shaw Brothers classic or even 'Enter the Dragon' and get a feel for a movie that harks back to a day when films were what films should be Fun, For-filling and Fantastic.