Donnie Yen plays historical character Guan Yu, but is this something that'll you'll remember or is it something that will be left to history, lets take a closer look.

In this costume drama Donnie Yen plays general Guan Yu a former prisoner of General Cao Cao (Jiang Wen) who asks Guan Yu to kill Yan Liang (Chin Siu-ho) who is the The leader of the warlord Yuan Shao's troops, in order to bring about peace to the kingdom.  After forfilling General Cao Cao's wishes and stopping to help build the Han Empire Guan Yu decides he must leave and return to Liu Bei (Alex Fong) and take with him Liu Bei's future wife Qi Lan (Betty Sun) for which he still holds love for. 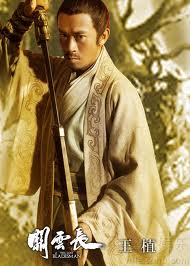 Although General Cao Cao lets Guan return promising a safe passage his advisors think  this is a bad idea and send orders to kill Guan and so the story of  'Guan Yu Crossing Five  Passes And Slaying Six Generals' begins .

The story that is set before Red Cliff and Donnie Yen gets to stretch his acting chops in  this costume drama but that doesn't mean he doesn't have some great action scenes.  This kicks in after Guan Yu leaves with Qi Lan and the story of the slaying of the generals  begins.  Mostly using the Guan Dao spear which was named after the character Guan Yu  and less of the hand to hand fights we are used to seeing Donnie yen in.  The stand out  fight for me being against Andy On who he fights on horseback throw an alley and it  really defines Donnie Yen's action choreography.

As said before Donnie gets to flex those acting chops (No shirts off here ladies) but its  Jiang Wen that takes home the acting award as the film lifts in every scene he's in  playing the famous General Cao Cao who will fight wars to bring peace and harmony to the kingdom. 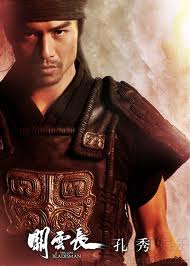 There's also a great moment when the action is about to start and then the doors close the viewer not seeing anything but you know Guan Yu has despatched the army and although your itching to see what happened the scene is a great one and unexpected.

As said before the fight scenes are wonderful and Donnie Yen gets to face off against his different foes for the final hour of the film.

This is a Donnie Yen vehicle and in recent years Donnie has proven that hes not just there to shed his clothes and look nice but that he can act and here he does a fine job.

The Lost Bladesman is worth anyone's time and is a fine film a costume drama where Donnie keeps his costume on and in doing so proves once again that there's more to Donnie than hes usually given credit for.  So make sure you watch this film as this doesn't deserved to be lost in history but to rank along side some of his best work.

The Lost Bladesman will be released in the UK on DVD and Blu-ray by Icon Home Entertainment on 8th August 2011.