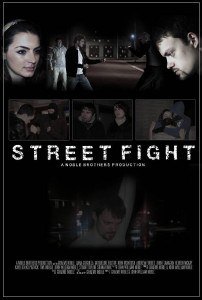 The film contains 12 gruelling fight scenes. Each fight is choreographed by the films editor, producer, director and lead star, Graeme Noble. Graeme is a Hong Kong movie enthusiast who has been watching Hong Kong films for over ten years now. He is also a published writer, writing for the Hong Kong and Asian film magazine, 'Jade Screen.' The fight scenes in the film are heavily influenced by Hong Kong cinema of the 1980's where big stars such as Jackie Chan, Sammo Hung and Donnie Yen remain a prominent influence.

The film was shot entirely on location in Aberdeen and Aberdeenshire. The majority of the fight scenes were filmed in freezing cold conditions in the winter. Luckily, nobody sustained any injuries whilst filming. With a cast of about 30 people, Street Fight is arguable Noble Brothers Productions best film to date.

The group have recently won three separate awards at film festivals in America for their 2011 feature length film, 'The Shadow of Death' and they are looking for some success with 'Street Fight.'
We have worked with Hong Kong celebrities such as JuJu Chan (who is starring in a Hollywood film this year), Steven Dasz (who is in Chinese Zodiac) and also Helene Leclec (who is in the new Keano Reeves film) - and we've also had mentoring tips from Hong Kong and Hollywood director, Antony Szeto - who directed the Sammo Hung film, 'Wu Shu.'