Officer Cheung (Andy Lau, Infernal Affairs, House of Flying Daggers, Chasing the Dragon), a senior inspector in the Hong Kong Police Force, is the most respected member of the Explosive Ordnance Disposal (EOD) unit. Before rising through the ranks, Cheung worked undercover within a criminal gang, lead by a ruthless crime boss notorious for his expertise in explosives. After Cheung’s undercover work lead to the break up of the gang and the arrest of the boss’s brother, the gang boss swears to take revenge on the man responsible for ruining him. 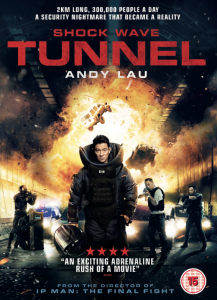 Seven years on, after the criminal mastermind disappears without a trace, he returns to Hong Kong to wreak havoc. Explosive attacks begin breaking out across the city, escalating until a shocking hostage situation unfolds within one of the world’s busiest tunnels, the Cross-Harbour tunnel. With the city facing what seems to be an impossible threat, only Cheung has the skills needed to end the crime boss’s revenge spree.

Shock Wave Tunnel is released on DVD, Download and On Demand 13th November from Cine Asia