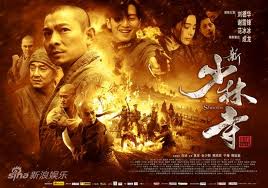 Shaolin has been talked about in the same breathe as Shaolin  Temple, but is Shaolin a master piece or does it burn to the  ground.

The story follows General Hou (Andy Lau) as a warlord and his number two Tsao (Nicholas Tse), as they seek to rule the land by bringing war and famine to their people while they jostle for power with the surrounding armies.  General Hou decides to betray a rival and ends up being betrayed himself by Tsao who has had enough of General Hou's regime.  Hou, his wife (Fan Bing-Bing) and daughter then flee for their lives and Huo seeks refuge in a shaolin Temple.  What follows next is Hou leaving his life as a warlord behind him and taking up the way of Buddhism and becoming a Monk at the Shaolin temple.

In a nut shell then this is the film, if your expecting a factual based film on the events of the burning of the Shaolin Temples then this isn't the film your looking for, if however you are after an action based drama about one mans journey for redemption and serenity then look no further. 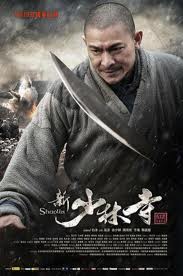 Andy Lau plays the title character well, its a very long journey to take within the time frame of the film and Andy Lau pulls no punches in his range from Fierce Warlord to Buddhist Monk, drawing the audience into his world through his different states of mind.  A mention also to Jackie Chan who gets to show why hes becoming such a great actor. Chan has always been action superstar but in recent years hes been flexing more than his limbs with some credible acting performances and this film is no different with Benny Chan giving Chan an extended cameo which sees him play the cook  whose at conflict with staying within the realms of the Shaolin Temple or seeing what the rest of the world has to offer.  Chan was to have a major role in the movie but due to conflicts in his schedule Benny Chan rewrote the part especially for Chan.

Nicholas Tse also gets to shine as the villain scowling at everyone and if Andy Lau is the turmoil within the movie Nicholas Tse is the surrounding darkness in which he tries to bring lightness to.

Overall this movie has something for everyone that loves action cinema from the sweeping shots of Kung Fu training exercises to the frantic finale that sees the monks take on the invading troops as they fight for the lives and traditions and the people of the Shaolin Temple. 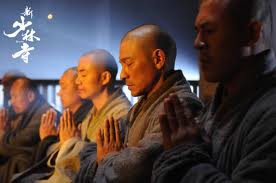 So it seems fitting to finish the review on a buddhist quote: