We’re loving the new teaser for the film, we can see the grind-house genre has inspired you, what other genres can we expect influences from?

I’m a big fan of ‘old-school’ exploitation, so there are several genres and sub-genres from the grind-house era that have influenced ‘Scarlett Cross’, both in the writing and shooting of the film, from Japanese, Hong Kong, Filipino and American Martial Arts movies, to 1970’s and 80’s Euro-Horror and Italian Crime movies. 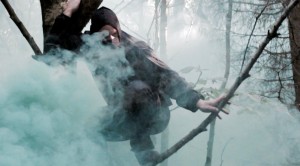 Scarlett Cross: Agents Of Death, (originally announced as ‘The Assassin Anthology’) was first envisaged as having 5 separate chapters being played out, is the final feature length film still in the same mould?

Yes, the original idea was to shoot a short film, ‘Chapter 1’ and put it on the web, fortunately, thanks to a very kind investor, we were able to turn the project into a feature film almost immediately, so the short never made it online. The ‘anthology’ concept allows me to explore additional characters, each with their own individual back story that I wouldn’t normally be able to include in a standard film format. A different female assassin is introduced in each of the first four chapters with a final chapter tying everything together. I’m hoping we can further develop these characters in future film productions.

Other projects have previously been announced, why are we seeing ‘Scarlett Cross: Agents Of D.E.A.T.H.’ before these other films? 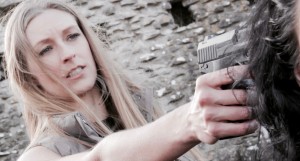 After dabbling in the ‘no budget’ indie film industry and being involved with or helping out with other people’s projects since around 2005, I’ve been trying very hard for several years to get a number of my own projects off the ground. The first full script I wrote was called ‘Friday’s Child’ back in 2010, sadly that project never saw the light of day thanks to an ‘executive producer’ who was full of promises but eventually delivered nothing most importantly the financing that was required for a project and cast of that size. Feeling very disheartened, I locked myself away and kept writing, working on another four scripts, ‘Blood Rush’, ‘Bitchfight’, ‘Ghost Warriors’, (a collaboration with Cynthia Rothrock,) and the original ‘short’ version of ‘Scarlett Cross’. I borrowed some equipment and crew and shot a couple of promos for ‘Blood Rush’ and ‘Bitchfight’. The idea was to keep shooting whatever possible, promos or trailers etc, until one way or another I could finally get one of my projects financed. That opportunity came in the form of ‘Scarlett Cross’ after teaming up with lead actress and producer Kat Clatworthy. So ‘Scarlett Cross: Agents Of D.E.A.T.H.’ became the first movie to go into full production.

What can the audience look forward to in this Dean Meadows movie? 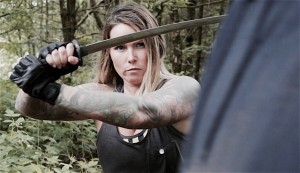 Female assassins, killer nuns, mad monks, ninjas, zombie super soldiers and a whole bunch of violence, bad language and nudity, not necessarily in that order! It’s definitely not aimed at a PG audience. I’m hoping that ‘Scarlett’ will establish a ‘brand’ and give the viewer a glimpse of what to expect from future productions. That’s the reason for putting ‘A Dean Meadows Film’ on the opening credits and in the trailer, it’s not to be egotistical, as obviously part of the movie belongs to everyone who has worked and is still working on it. Some will love it, others will hate it but once ‘Scarlett’ is released the audience will certainly know what to expect from ‘A Dean Meadows Film’ and then hopefully they’ll be looking forward to the next one!

I know I’m looking forward to the action in this one, any hints on what we can expect?

The martial arts sequences are mainly choreographed by Karate and Kickboxing Champion, Dean Williams, who has worked with everyone from Steven Seagal to 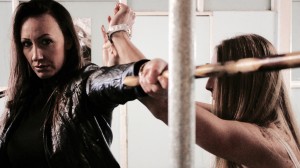 Benedict Cumberbatch. I grew up watching Hong Kong movies, but I really didn’t want that style of action for all the choreography in ‘Scarlett’ as there are enough filmmakers doing that kind of thing and I wanted to do something completely different. That said, there is a little nod to Bruce Lee and the ‘Bruceploitation’ genre in the most unlikely scenario and even the wacky Godfrey Ho Ninja films from the 1980’s. Aside from that the fights are hard hitting and gritty, influenced as much from the violence of modern action and horror as they are from the ‘old-school’ martial arts era.

It always helps having stunning female leads, Kat Clatworthy certainly ticks that box, who else can we expect to see on-screen? 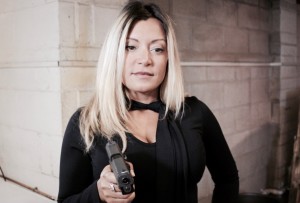 We have some amazing martial artists and upcoming British talent involved with this movie, Tayah Kansik is a lethal weapon and looks deadly on screen in her role as ‘The Bodyguard’, Hannah Farmer as ‘The Yakuza’ is also one to watch, Maria Lee Metheringham sets the screen ablaze as ‘The Assassin’ and Sky Rose is perfect in her villainous role as ‘Reaper’. You certainly won’t be disappointed if you’re a fan of ‘fighting females’.

We’re looking forward to seeing the final film, when can we expect a full trailer and release date?

There will be a second ‘teaser’ coming soon and a full trailer in the summer. The film will be ready for distribution towards the end of the year and then ‘Scarlett Cross’ and the ‘Agents Of D.E.A.T.H.’ will finally be unleashed!