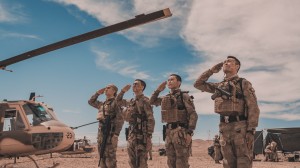 If you're looking for a movie with impressive, non-stop action scenes, in a modern-day setting, which includes scary-cool gun-tech, slo-mo bullets fired by snipers and tank chases, then Operation Red Sea is for you.
Directed by one of Hong Kong's finest, Dante Lam (Beast Stalker, Stool Pigeon), he follows up his 2016 hit Operation Mekong, with another 'inspired by true events' actioner with the African-set 'Operation Red Sea'. The plot is incredibly thin and in a sense dilutes the plot and characterisation of last year's 'Wolf Warrior 2', but ramps up the action sequences ten-fold. 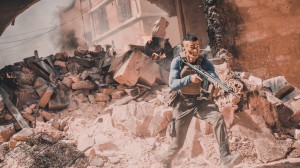 We follow an elite unit of the Chinese Navy, leaving a battle with Somali pirates in hostile waters to locate a Chinese national, held captive by a group of rebels in an unstable fictional African country. From the opening scenes, the audience is shown the almighty power of the Chinese Navy, from warships to helicopters along with its various tech and specialist crew. Some reviews have picked up on this, as did several audience members, gasping and saying 'Oh, man', but is it really any different to what Bruckheimer and Michael Bay have been doing since forever and even the late-great Tony Scott, too? In fact, Hollywood have been bombarding our senses with their military might for some considerable time. Gone are the days where parading one's missiles and tanks down the streets is the awe-inspiring norm, China are doing it in spectacular style and showing off their hardware and patriotism in true cinematic glory. And why not? If you've got it, flaunt it, right?

Many will say Dante Lam should go back to do what he used to; the tight, HK actioner, but nobody could deny the impressive scale of 'Operation Red Sea'. Like his previous 'Operation' venture, in Mekong, Dante handles the politics well and delivers a continuously eye-opening movie that packs punch after punch and for some, due to the thin plot and overlong running time, will be a little too exhausting to watch.

Another downside was weak characterisation and the lack of a super villain. I wanted Frank Grillo or Scott Adkins in there, but instead got an Osama- 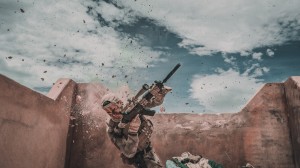 lite in a confusing bio-weapons storyline, involving something called Yellowcake. Amongst the slo-mo head-shots and close-ups of exploded limbs, I craved more scenes with the main baddie as well a central hero I could identify with or feel something for.

I do, however, cheer on more Operation Red Seas and, as a screenwriter myself, writing for the Chinese market, I know there will indeed be more. There's a want for more realistic, patriotic movies in the Far East, including the "nudge-nudge wink-wink don't mess with China, look at their bad-ass soldiers and weaponry" digital messaging.

The now Beijing-based director Renny Harlin (Die Hard 2, Cliffhanger, Long Kiss Godnight, Skip Trace) has two military-themed epics in the works, 'Operation Somalia' and 'Operation Wild'. The budgets are certainly there and the directing and writing talents are vastly improving, so it's without a doubt, both 'Wolf Warrior 2' and 'Operation Red Sea' are not only setting the tone, they've upped the action stakes considerably.

Big thanks to the Pimp Shuei bar, Cine Asia and Mike Fury for hosting and inviting me along.

Its been seventeen years since the passing of Leslie Cheung. 🙏 easternfilmfans.co.u… pic.twitter.com/XDzt…

@NevskyAlexandr You too, stay safe 🙏