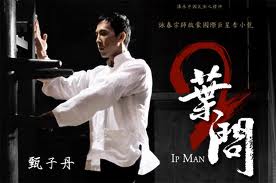 Ip Man 2 follows on where Ip Man left off as he travles to Hong Kong to open his Martial Arts school but can Donnie Yen keep up the high adrenaline Fists of Fury of the first instalment.

Ip Man (Donnie Yen), has moved to Hong Kong along with his wife (Lynn Xiong) and son.  Setting up a martial Arts school on a rooftop, he accepts his first student Wong Leung (Huang Xiaoming) after demonstrating Wing Chun in a fight.  His school grows but other schools in the are aren't happy about him teaching and invite him to dual them and the leader Hung Chun-Nam being none other than Sammo Hung.

All well and good I hear you say, wait there's more, in a bizarre twist the second half plays like a rocky movie, now you can take this as it sounds or take it as how its meant to sound, a compliment.  It's Eastern vs. Western boxing with chief villain being called Twister (played by our very own darren Shahlavi) who plays the world boxing champion; taking on the chinese in a no holds barred slugfest. 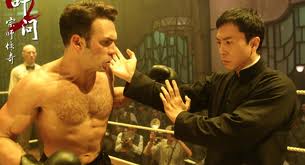 There's some fine performances here from the entire cast with some well known faces popping up, Simon Yam literally steals a scene at the very start but fails to show up again until the end.  Sammo Hung gets to go head to head with both Donnie Yen and Darren Shahlavi and both scenes are a knockout, its good to see Sammo still busting some moves at 58 years young.

Darren Shahlavi as twister deserves a mention, he plays a character that you have to hate, i was rooting the chinese to kick his ass and i'm British, that shows how good a performance it is.  The real treat about this is that it's so overdone its near comical which is probably a good thing as if you take away the comical effect he would really have just been a racist pig.

The final two fight scenes are worth there weight in gold and i dare anyone not to enjoy this movie.  In every way the first Ip Man is a better film, but for every other way Ip Man 2 is a triumph.  If Ip Man was like bamboo that bent and swayed in the breeze with grace and beauty, Ip Man 2 is like a 4x4 plank that smashes you repeat-ably over the head.