Eastern Film Fans are proud to present an interview with Mr Jon T Benn made famous as the Mafia Boss in Way of The dragon.

Firstly I’m intrigued as to how over 40 years ago you ended up in Mainland China?

I went to Hong Kong in 1971 as I had just sold 24 gift shops in the States and wanted to see where I had been buying my goods from as I had only bought them from gift shows in the States.  In 1977 I was in the first 100 people allowed to visit Mainland China.  I have since travelled to many places in this beautiful country and moved to Shanghai in 2001.

With over 50 movies to your name you’ve seen and worked with some of the greats, Jackie Chan, jet Li, Bruce Lee and even Steve McQueen, was it a case of being in a surreal world or were you quite levelled headed about the whole experience?

I have acted in 52 films with the latest being "The Man with the Iron Fist" with Russell Crowe and Lucy Liu. I was the assistant to Terence Young for 2 years and met many famous people.  He directed "Dr. No", "From Russia with Love," Bloodline" with Audrey Hepburn and many others.  It was a great experience! 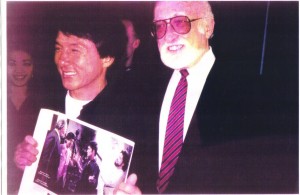 You also have a new book out called ‘Remembering Bruce Lee’ can you tell us a little about the book and what inspired you to write it?

If anyone wants to buy one they should just use Paypal and type in:  jonbennasia@gmail.com.  I have sent them to many places in the world, even Russia! The longest chapter is about Bruce and the other 17 chapters are my life story. I wrote it as I have had the same questions about him hundreds of times. So I decided to write it all down.

Way of the dragon wasn’t scripted I believe, so was that challenging for you as an actor ?

My book describes my experiences with Bruce.  He was a great man in so many ways.  He directed each scene until everyone was perfect and then he shot it with one take most of the time.  He didn't have a script, just an outline.  He would tell me to say or do something and I would do it again in 1 take. 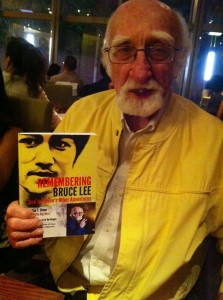 So I think the phrase Bruce used when he spoke to you once was “I’ll make you famous but I won’t make you rich”, I certainly think he did that?

I have travelled the world and everywhere people stop me and ask if I was in a film with Bruce Lee.  Even yesterday in Shanghai 2 Chinese girls asked the same thing.  It's a great way to meet pretty girls!  I haven't changed much.  I didn't have much hair then either!

In 1993 I opened the Bruce Lee Cafe/Museum which was the only place of tribute in the world.  Over 20,000 fans from around the world visited.  The HK Gov. made me a "Goodwill Ambassador" for bringing so many tourists there.  I had to close it 3 years later as the landlord doubled the already high rent. 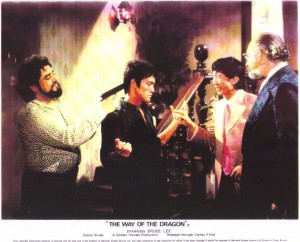 The 3 films on a desert island: "Way" for sure plus "Inchon" with Sir Laurence Olivier where I play a Colonel in the US Army. And "Robin Hood" with Russell Crowe.