I Saw the Devil - review 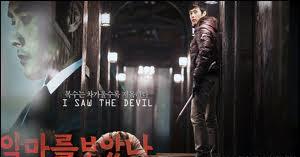 A dark tale of brutal revenge is served up by Jo-woon Kim but will you see the devil while watching or will you just see whatever you've eaten come back up!

I admit I don't usually start my reviews with a somewhat cautionary paragraph but due to the scenes within this move its best you know up front, but lets talk a little about the story. ‘I Saw The Devil’ follows serial killer Kyung-chul (Choi Min-sik), who murders Ju-yeon (Oh San-ha), whose the pregnant fiancée of federal agent, Soo-hyun (Lee Byung-hun).  After the grieving has been done Soo-hyun decides to track down the killer with the help of some inside information and some nifty tracking gadget.  Once tracked down instead of killing Kyung-Chul he decides that he will feel the pain he has and still feels and sets out to make he suffer and then suffer some more. 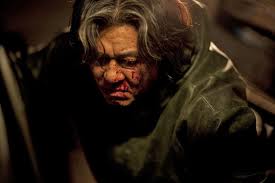 The story is that of revenge but the nature of it is brutal and horrific at times those that don't have stomach of iron or not accustom to the horror genre of late then please seek your entertainment elsewhere.  Those of you still with me your in for a treat its brutal and bloody but just so darn good as lee Byun-hun trails a path of destruction of his own making while trying to unleash his own punishment onChoi Min-sik.

Eventually the lines are blurred on who is really the devil here and whether you still sympathise with our hero by the end.  Now I'm a sucker for a revenge movie and this is what this picture is but more than that its a tour de force that grabs you by every limb then without any subtlety rips them all off.

2 thoughts on “I Saw the Devil – review”