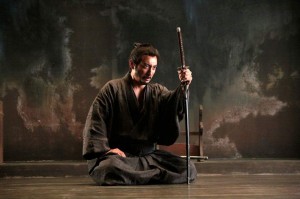 HARA-KIRI Death of a Samurai

Poverty stricken samurai Hanshiro Tsukumo (Ebizo Ichikawa) requests to commit ritual suicide at the House of Ii, run by obstinate Lord - Kageyu Saito (Koji Yakusho), in a desperate attempt for a honourable end. In an effort to persuade Hanshiro to rethink his request, Kageyu tells the tragic story of a similar plea from young ronin  Motome (Eita). Hanshiro is stunned by the horrifying details of Motome's fate, but insists on dying with honour. With his final breath, Hanshiro makes a last request which results in the shocking revelation of a bittersweet tale of vengeance against the house of a feudal lord. 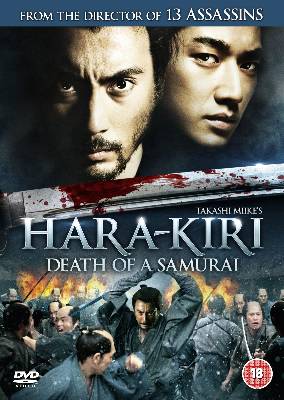 Takashi Miike no sooner finishes 13 Assassins than he's back in the chair for another Samurai tale this time remaking Masaki Kobayashi's 1962 Cult Classic.  Now lets gets straight to the point for all you Takashi fans out there, there is no blood splattered scenes of entrails and heads flying around a red satin screen.  No this time he's reigned in the urge to fill your screens with a sea of blood and instead decides to tell the tale using flash backs and storytelling to show how once proud samurai's are shown up for what they are but a frail ronin.

So without the blood does the film still work, well yes and no, I would have have loved to see the Ronin hack and slash his way through the so called samurai but in fact the way he does show them up for what they are is indeed a fabulous tale, I won't spoil it for you!

It would have been easy for Takashi Miike to bring us another slice of hack and slash to the screen but with this tale he's actually done something he's not done before and told a story without the  use of a red splattered screen and for that he's commended.

So grab yourself a slice of this action that delivers on story and style over hack and slash.  Much like 'Samurai' meaning 'those who serve' you would do well to serve up some of Hara-Kiri that will in time become another Takashi Miike classic.