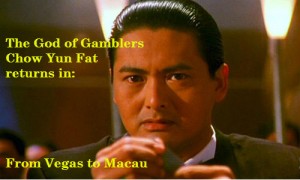 Wong Jing will bring Chow Yun Fat and Nicholas Tse together in 'From Vegas to Macau' which will see Chow Yun Fat return as the iconic Character Ko Chun from the God of Gamblers series with a release date of Lunar New Year 2014. I have a passion for a flutter now and occasionally, bit of blackjack, a and of poker or even a slot machine you can't beat playing those movie themed slots games is a very popular way of spending time at an online casino like
www.gamingclub.com/au.   Although you don’t need to know the movie to enjoy the games it always helps if you do, and it is also a lot of fun, especially if you play a slot game that is based on one of your favourite movies.   Give me a Casio Raiders Fruit machine and I'd be a happy man. 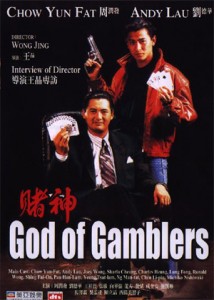 Chow seems to be on form with Wong Jing saying that there will be comedic elements especially from Chow's character who when questioned about why he was returning to the role said;

“Of course it’s because the production crew is strong, there are a lot of beautiful women, and I get the chance to act alongside my idol Nicholas Tse.  “If I don’t, I won’t be able to do right by his parents. When I was shooting in TVB, I worked with his parents and they took good care of me."  "Now I want to ‘repay the favour’, and see if there are chances to bully him.”

The press loved it and proved that there's still a place for The God of Gamblers and the world of Casino's.

I for one can't wait to see this movie it has all the makings of a classic and will no doubt bring comparisons to the original which was such a classic.

Stay tuned to Eastern Film Fans and we'll bring you all the latest news as we get it on Wong Jing's "From Vegas to Macau".