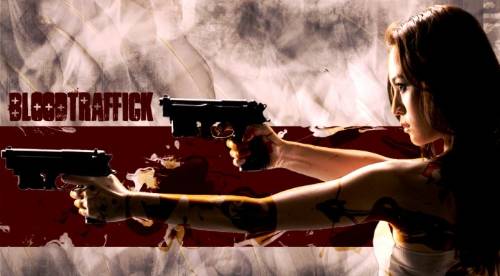 You first started out as a model and then TV actress but I first saw you in a Felix Chong, Alan Mak directed film 'Overheard' can you tell us what you remember of the shoot?

I remember that shoot VERY well! I was very excited to be working with such a great team and it went very smoothly! Both directors were super nice and very encouraging. We shot for 2 hours and although the final edit of the scene in the movie ended up being  very short, I must’ve left a pretty good impression because Daniel Wu (whom I acted with, in the scene) – has since signed me to his management company and I have shot many amazing film projects to date.

It was sometime after that you then did 'Love in Space' for Tony Chan, with a great cast Aaron Kwok, Rene Liu, and Eason Chan how did this role come about? 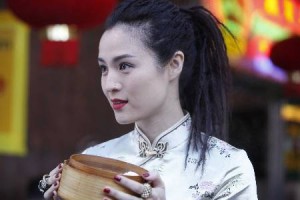 I had met the directors Tony Chan and Wing Shya a while ago & they wanted to find a role for me that wouldn’t require me to look ‘pretty’ in the visual sense because then it would allow audiences to look past my appearance and focus on my acting. I was all for it and really loved my role as ‘Bunny’ in ‘Love in Space’ --  the dreadlocked, nose-ringed, dim-sum-cart-pushing girl in Chinatown. I love playing all characters and coming from a modeling past (where one is always expected to look good), I relish all opportunities to NOT look ‘perfect’. I find it far more interesting to examine (and represent) imperfections. All great movies and roles focus on imperfections in life, in people’s characters, in situations. There’s so much to go on and much more to look at under the microscope.

I truly love acting. For people at home watching, yes it IS acting, but for me, it’s not acting. It’s the ability to BECOME someone else, completely, for a few hours (small role) or months (main role). It’s a magical process for me and being a very curious person, it’s fantastic! To pretend to be someone else gives me the chance to have a few lives WITHIN this life and I’m very  thankful to be able to do that. I look forward to many more ‘lives’ in the coming years with the roles I will play. I love what I do and I’m thankful to the people who make this possible for me, and are willing to live these ‘lives’ with me.

The trailer for Jennifer Thym directed 'Bloodtraffick' looks awesome how did the opportunity for the role of Ava come about?

Thank you! Jennifer and I met during an acting workshop weekend (taught by Hollywood acting coach Jeanne 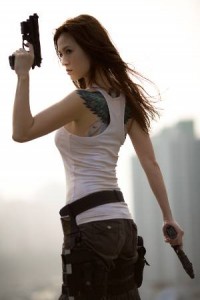 Hartman, who is amazing!) in Hong Kong two years ago and we just hit it off! After deciding to shoot something together, we discovered that we both love strong female characters,  vampires and the dark side. It snow-balled and gave birth to Bloodtraffick, an action/fantasy short. In a world torn by a war between vampires and angels, Ava, who is a human vigilante on the hunt for her missing sisters, is lured into the den of a vampire.

It looks like it was very physically demanding; did you have to train much?

It was a physically demanding role and prior to shooting, I prepped by swimming, jogging and working out at the gym. Then we trained with Philip Ng, our action choreographer for a few days to learn the moves.

The hard part wasn’t just learning how to time the moves between Kirt and me, which IS important- because if we got it wrong, we could potentially put our heads in the line of the next upcoming kick! It was also crucial to make sure that Kirt (who is 6 foot 2 and used to play pro baseball in the States) ‘faked’ his strength so he DIDN’t end up accidentally injuring me. And that I could fight ‘tough’ enough to be able to go head-to-head with a physical character 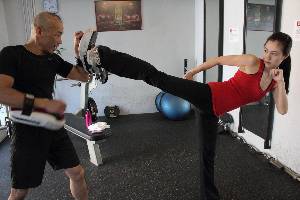 like Kirt. On set, once the camera starts rolling and our heads are in ‘character’, it’s really hard to control the real emotions and in a fight scene, it’s very easy to get hurt. So preparation is key. And I’m happy to say, we’re very happy with the result.

I mean, we did end up bruised and somewhat battered after filming the fight scene, but it’s all good. You go into it knowing there’s gonna be some battle scars or souvenirs to remember the film by.

On the topic of souvenirs, I LEFT a part of my right thumb on the set!!!

So can we expect to see a feature length version of Bloodtraffick, I want to see it now?

We have just started the film festival circuit with Bloodtraffick and it’s met with great response so far! I won a Best Actress award (HollyShorts Film Festival in LA) and we have also won Best Short, Best Editing and Best Cinematography at the 2011 Salty Horror International Film Festival. The short’s been gathering steam and yes we are 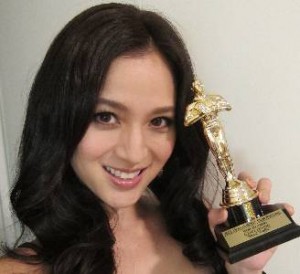 almost finished with the script for a feature-length film, so fans won’t have to wait too long! I can’t wait to be Ava again, for the full journey. It’ll be a wild and awesome ride!

So just to add to the success that this short film is having so far you picked up a best actress award in LA, you must have been very proud of the films success story so far?

Yes! I’m SO happy to receive the Best Actress award for Bloodtraffick, from the film capital of the world! It’s a great feeling to be recognized. I did a lot of homework, built up a very deep understanding of my character, Ava.  Character development is so important to our craft and I am happy people can see that translated on screen.

I’m also very proud to be sharing the award with our amazingly hard working team, who pulled it together and worked their asses off for three solid days. After watching Bloodtraffick, many people are still surprised by what we were able to accomplish in a very short period of time.

On a side note you recently met with Kevin Spacey any chance we'll see 'The Bloody Suspects' coming soon ? lol

I watched the amazing Mr. Spacey in Richard III (two nights in a row!) about two months ago as it was touring Hong Kong as part of The Bridge Project. I had the chance to hang out with Mr. Spacey abit. He is truly an inspiration and a mind- blowingly talented man. I would jump at a chance to work with him and really look forward to an opportunity like that in the future. 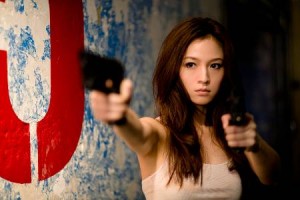 Moving onto more recent projects can you tell us anything about 'Jasmine' which again Jennifer Thym was involved in as a Producer?

‘Jasmine’ is currently in post-production and it’s an intense thriller that I can’t wait to watch once it’s finished! I am the title character and I can’t reveal too much beyond saying that it was a pleasure working with such a great team and Jason Tobin is amazing in it as Leonard To.

There's is also great buzz going around about the forth Coming film 'The Man with the Iron Fists' is there anything you can tell us about the project and how you are involved?

I had the best time shooting Iron Fists. Being out in China for weeks, the cast and crew really bonded and being able to work with RZA (Director) and Corey Yuen (action director) was amazing. RZA had such a clear vision for everything and if you like Kung Fu, Asian cinema and a good ass-kicking movie, Iron Fists will blow your mind.

I trained for a few weeks for my role and all I can say about the whole experience AND the role of ’Gemini Female’ is- KICK ASS and NO FEAR. I performed 95% of my own stunts and loved it! It was only after I did one move that my stunt double told me that that was one of the hardest and most loathed moves of martial artist stunts. I can’t wait to see the movie and there’re only a few short months to wait!

So what about future projects, your back in Hong Kong now can I squeeze you for any info on what your doing?

I’m currently in pre-production of my next film, which I’m very excited about. It is a love story and I fell in love with the story/script immediately while reading it and can’t wait to start shooting it in a few weeks! I play a dancer and as female lead, I’ve spent a lot of time prepping for the role now ... very very excited! I can’t reveal much more at this moment, but will be happy to talk about it at a later stage.

In 2012, I am looking forward to the release of three films, a tv show and multiple other projects so it will be an exciting year! Bloodtraffick is gathering lots of momentum on the festival circuit, so I’m hoping for more awards for the short film and waiting eagerly for pre-production on the full length feature to begin.

If I were stuck on a deserted island indefinitely and could ONLY have 3 films with me to keep me sane (only 3?!?! You are so cruel!)…They would be:

1) The Long Kiss Goodnight- To get me through the tough days and to remind me to keep being strong. Geena Davis’ character was totally bad-ass and inspirational. I love a strong female and I would love to be her, fighting to the last second and never giving up.

2) Zoolander – This movie never fails to make me laugh and always puts me in the best mood. Stranded on an island, I would need to have some mindless silly laughing to get me through the lonely nights.

3) When a Man Loves a Woman – Because love is what makes the world go around. One of my favorite movies, with amazingly raw and touching performances from Meg Ryan and Andy Garcia. Alone on an island, I would want to be reminded of love. The pain and the suffering, everything one would put himself or herself through…it’s all for love.

Eastern Film Fans wish to thank Grace Huang for taking time to do this interview and wish her all the success in 2012 and beyond.

THE BRIDE WITH WHITE HAIR – Ronny Yu (The Phantom Lover; Warriors Of Virtue; The Bride of Chucky) directs this highly operatic fable based on a well-known martial arts novel. To be released on Blu-ray 9 November amzn.to/3adB81x pic.twitter.com/LVR0…

Hey folks, we've got a podcast coming out tomorrow and we'll discuss two Hong Kong productions starring Westerners! Including the Hammer-Shaw Brothers co-production SHATTER that came with all kinds of behind the scenes drama Hope you get a chance to listen! twitter.com/PodcastO… pic.twitter.com/oZPP…