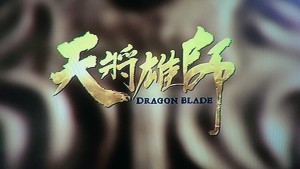 Jackie returns in a full on Epic drama that packs a punch and goes for the heart but will it twist the blade in or soar like a dragon ? 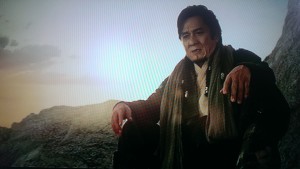 Jackie Chan plays Huo An the leader of the Silk Road protection squad who manage the various nations on behalf of the Han Emperor and protect the silk road.  Huo An and team are double crossed and thrown into an outpost Wild Geese Gate and are forced to rebuild it in 15 days. 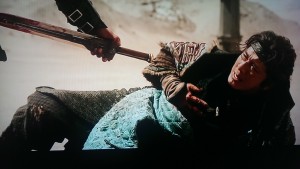 But the peace and harmony will soon be shattered as Tiberius (Adrien Brody) threatens to take over the Silk road by any force necessary and so Nations will fight against the evil Lucius, but will they Unite to drive them from their lands?

Before we begin I watched the Hong Kong version which runs at 125mins compared to the Internal release which is 103mins, so calling it an epic I can justify that I've not seen what the shorter version looks like but 20mins of footage may well change the picture from what it sets out to be. 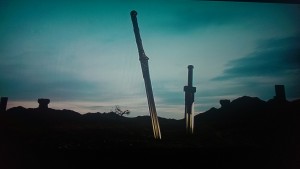 It is an Epic, sweeping landscapes,  moments of sheer brutality, and moments of reflection.  Dragon Blade ticks the boxes and stands up in Jackie Chan's catalogue of films.  Make no mistake this is a Jackie Chan film thats why you pay your fee to see Jackie and he doesn't disappoint.  What makes this film even more worthwhile is the supporting cast and although John Cusack may play it by the numbers Adrien Brody almost steals the show with his menacing performance of the evil Tiberius.  Lin peng also gets a mention for one of the very few light hearted moments for de-robing in front of Jackie who proceeds to spit his wine everywhere, its a fun scene and its nice that in a film as brutal as this, and make no mistake Daniel Lee doesn't pull any punches on the blood, brutality or death scenes, Jackie still gets to have that twinkle in his eye and a moment of light heartedness.

Its a film about honour, friendship, betrayal, love, culture but its a film that Jackie Chan can deliver and its a film with heart.