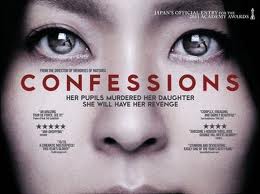 Confessions does just that and tells the story through a series of confessions but will you confess to liking this slice of Japanese cinema.

The first act starts by the teacher Yuko (Takako Matsu) telling her class about Students A and B and how they killed her daughter.  The second Act then goes on to look at the confessions from those involved or around those involved, slipping in and out of various lives and exploring the reasons why such an act of violence occurred. 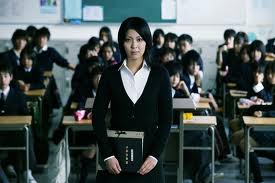 So there you have it the story in a nut shell, and yet this isn't a straight forward film, this is a Japanese film and if you know your cinema they tend to be some of the most intriguing films in world cinema, and this film is no exception.   The first thirty minutes roots you to your chair, literally I didn't move as Yuko told her story, from that opening to then a series of wonderfully created inter linked stories about why these teenagers had done such a thing and the reasons if any they are who they are today.  This all done with some style by Director Nakasima.  Using a palette of greys with a splatter of colour the film dares you to keep watching as revenge is served up. 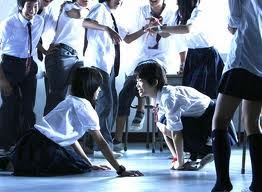 I'm not sure that after the first thirty minutes the film can ever recapture such a powerful opening but it does tell the story well.

This film comes highly recommended its a fabulous bit of film making and a great movie, never shying away from the violence but not having to go to the extremes of being explicit.  So I confess to loving this movie and if you can take time out to see it I think you will too.