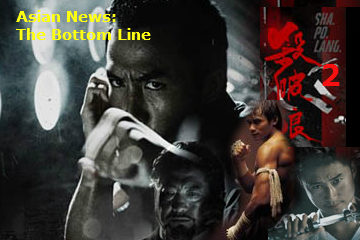 Asian News : The bottom line brings you the latest news from the world of Asian cinema.

News has come in that a sequel to Sha Po Lang (Killzone) is in the works re-teaming Donnie Yen, Sammo Hung, Wu Jing with none of than Tony Jaa.  It might be a pipe dream but I’m not the only one whose excited by the prospect.

Wong Jing will direct Chow Yun-Fat and Nicholas Tse in his next film, rumoured to be God of Gambler’s 4, This might be more hopefulness!!

Talking of Chow Yun-Fat, Eric Tsang is to bring both him and Andy Lau back to the TV screens for TVB.

Script is being worked on for a Rush Hour 4 which will see Jackie Chan and Chris Tucker reunited.

The first two instalments of the Stephen Fung Tai Chi 0 trilogy will be released only a months apart first landing end of September.

Tony Leung Chiu Wai will be traveling to Japan to star in 1905, the latest film by director Kurosawa Kiyoshi.

Terracotta Festival Takes 5 Asian Films on a UK tour. For the first time in its four year history, Terracotta Festival is expanding its successful London residency of current Asian cinema showcase to selected venues in the UK. Check out the Terracotta Website for more details.

Van Damme also said in an expendables 2 conference that he’d be keen to play a role in the remake of Bloodsport.  Hell Mr Jean-Claude Van Damme you could just give us Kumite instead!!!!

KOTOKO - out 8th October on DVD and Blu Ray - winner of the BEST FILM award in the Orrizonti of the 68th Venice Film Festival, and one of his greatest masterpieces!

Tetsuo: The Iron Man and Tetsuo II: Body Hammer - out Third Window Films are very pleased to be the first in the world to release a newly remastered high definition blu-ray of Shinya Tsukamoto's cult classics.  Both from Third Window Films

The Admiral - out from Cine Asia 24th September 2012 The Admiral is a $10.5 million budgeted, action packed masterpiece that explores one man's, and by reflection one nation's, turmoil: what must be sacrificed for country and for duty.  Check more titles from Cine Asia Here