A contemporary martial arts action film that not only has thrilling action sequences, but is also a story of heart and courage. 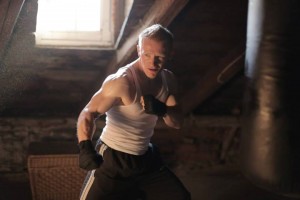 Mike Schneider, a well meaning if belligerent fighter, finds himself drawn into the world of an underground, internet-streaming martial arts tournament. The fights are streamed on the internet and his online fan-base soon swells, much to the delight of the unscrupulous promoters controlling the fights. But after one fight results in Mike being stabbed and being admitted to hospital, he tells the promoters that he intends to quit fighting. They, however, have other ideas and Mike soon finds his life is on the line for the entertainment of viewers streaming the fights across the internet.

One Million Klicks is a showcase for the talents of its star Mike Moeller, yes 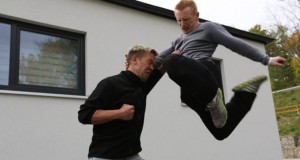 believe the hype this kid has got the moves, he lights up the screen with every flip, twist,  kick and punch.  The story is the usual guy meets wrong guys, beats up other guys, finds spiritual guy and becomes all the better for it.  No seriously the film packs a punch, it makes use of the locations and sticks to its winning formula which is Mike Moeller kicking ass.

Reasons to recommend One Million Klicks, I could give you a million, but for now just the one, Mike Moeller.

One Million K(l)icks is out NOW in the UK. You can buy your copy here:
iTunes: http://apple.co/2s5wAn9