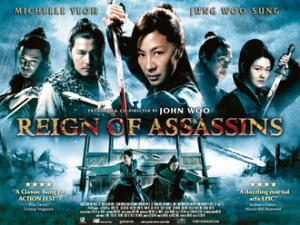 John Woo co-directs an all-star cast in this period-set martial arts actioner that combines the action-comedy and romance of “Mr. & Mrs. Smith” with the identity swap thrills of “Face/Off”.

In Ancient China, “Drizzle” is the most deadly and ruthless assassin of the Dark Stone gang. After a life of theft and murder, she seeks to atone for her ways and leave the gang forever. Undergoing a drastic procedure to alter her appearance, she changes her name to Jing and starts a new life in the capital.

Even with her new found life as a shopkeeper and a budding romance to Ah-Sheng, the Dark Stone gang is hot on her trail. She alone holds the secret of the mystical Buddhist monk’s remains, which legend says the possessor will gain control of the whole world. The gang will stop at nothing in their pursuit to control this power.